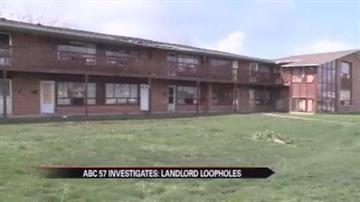 MISHAWAKA, Ind. -- Last month 15 families were told they had hours to get out of their Mishawaka apartment building, the Princess Apartments at 635 East 12th Street.

The issues inside the building were far from cosmetic, they were life threatening for tenants inside.

ABC 57 investigated the fallout after officials condemned all 27 units and also learned more about the landlord of the property, who has yet to show his face to city officials.

Right now the complex looks, feels and sounds like a ghost town. All the units are abandoned just one month after being condemned for black mold, roaches, bed bugs and life threatening water leaks.

“We firmly believe that these people's lives were in danger at that moment, especially with water coming over the electrical panel, a fire could happen at any moment,” said Mishawaka Building Commissioner Bo Hundt.

Hundt says no one will get the chance to move back in. The landlord, Randy T. Miller, never made the necessary changes or ever met with Hundt during the 30 day period he had to do so.

Now, the apartments are set for demolition.

“The 30 days has passed and this point we are moving towards demolition of the property,” said Hundt.

Hundt says the complex had structural damage and could have fallen down on itself.

The neglect of the property forced the 14 families who call it home to make a disruptive and sudden exit.

“We weren't even able to take much at all with us because we had to get out that night,” said Eric Osbourne, another one of Miller’s tenants.

When ABC 57’s Kim Chappell got a look inside the now abandoned building, she found shoes, furniture and food all left behind. It was clear residents had to leave quickly.

But now, the building is not just a problem for the former tenants, for Miller or for the Building Commissioner. The taxpayers of Mishawaka will have to pay the bill to tear down the blighted building and it will cost thousands.

“We don't have money just to go out and tear down a building just because somebody wasn't there to keep it up to code and wasn't around to even check it out,” said Hundt.

ABC 57 asked, “Does it concern you that this is how this guy apparently runs an apartment complex and he has other properties not only in your district across the state?”

Hundt said, “It concerns us very deeply that anybody that is in the city of Mishawaka would let a building get to this point and not respond to anything that we requested.”

ABC 57 took a look at Miller’s other rental property in Mishawaka, a now abandoned home on Lawrence Street. Code Enforcement recently yellow tagged the property, meaning they were forced to shut off the utilities.

Despite two failed rentals under his belt and court documents that show foreclosures and financial trouble, ABC 57 learned there is no law or ordinance in place that prevents Miller from buying another property and renting it out.

“It would be just like me or you going out and buying a property from the bank. The city has no regulation over who buys properties or anything like that,” said Hundt.

Hundt says that loophole in the system irks him.

“Yeah it is a problem, me and you know it's a problem, but there is nothing you can really do about that,” said Hundt.

In fact, Miller can pretty much walk away from the Princess Apartments, from the tenants who relied on him and from Mishawaka city officials with nothing more than a slap on the wrist.

And trying to get Miller’s side of the story wasn’t easy.

He avoided phone calls and messages from ABC 57.

City officials haven’t heard from him or seen him either.

“Last word I got it was Arizona. I heard he was in Indianapolis. I have spoken to him four to five times on the phone but I have never met him in person. I don't even know what he looks like.  He could be your camera man, I don't know,” said Hundt.

Osbourne used to collect the rent for Miller. He hasn’t seen him since last Thanksgiving and now he isn’t surprised that he’s gone off the radar.

“He always had a nice car and a nice house somewhere in Granger,” said Osbourne.

Tenants say he got out right after most of them paid him rent for apartments they got kicked out of days later.

So is this case of a slumlord operating in Mishawaka? Hundt is being cautious before using that term.

“I wouldn't go off and call anybody anything like that,” he said.

But the tenants who paid $550 a month to live in squalor say it’s a fitting term.

“To his face I would say, ‘Randy you are slumlord.’ I always paid my rent and I got nothing in return,” said Pam Molnard.

Molnard was also forced to find a new home after seven years at Princess Apartments.

Now she and Osbourne want to find Miller and get an apology they say is years overdue.

“That is the harshest part. He is not going to face the tenants he does not have to come back here and look them in the face and say ‘I'm sorry.’ He's not going to have to do that,” said Hundt.

Hundt may never meet the man who left his department with a gross and expensive mess to clean up and pay for.

That is unless he sets up shop in Mishawaka again, and right now, there's nothing stopping Randy Miller from doing just that.

“I think this was a big eyebrow raise for us as a city I thought we did the best we could. This is the first time this has happened in the city of Mishawaka,” said Hundt.

Now lawmakers in Mishawaka must decide if their laws need to be changed to protect future renters from landlords with a documented history of putting tenant’s lives in danger.