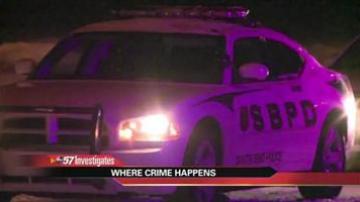 It's common for local news agencies to come out with annual crime data. Police typically release that data once a year and we push the information out to you.

But now with Crimereports.com it's easier for us to keep an eye on the numbers too, in real time. Numbers that we can crunch along with police and release data faster.

Violent crime in the city of South Bend is down over the past year. Even though the numbers are down it seems like shootings, drugs, assaults and even homicides are pretty common in the city.

Over the last year there were 80 shootings in South Bend, so far for 2014 there have been at least 5.

We tracked the numbers over a 30 day period, talked to the people living where the crime is taking place and then checked in with police on what they're seeing and doing to combat the issue.

When asked for crime numbers from December 15, 2013 to January 14, 2014 South Bend Police told us to use Crimereports.com. By logging on we were able to see where and when crime was happening each day across the city.

Downtown from Western Avenue to LaSalle, we discovered a large number of car break-ins.

"What we do have is a problem with property crime when it comes to vehicle larceny," Captain Phil Trent with the South Bend Police Department said.

In just 30 days there were 8 cars broken into and within walking distance of downtown there were a handful of assaults and home break-ins.

"Go find yourself a packed parking lot and you will find incidents of vehicle larceny," said Trent.

We asked South Bend resident Jennifer Soos what she thought about downtown.

"I wouldn't say that it's unsafe but if there's problems with theft, it's probably just because of parking at condos and parking garages," said Soos.

That is a message sent loud and clear at one parking garage off Main Street where it clearly states you're responsible for your own property.

North of Downtown, Council Oak and Portage Avenue was another problem area.

Crimereports.com showed during that 30 day time frame there were three assaults, six car break-ins, a stolen car and a home break-in.

"We see it too. We run the numbers and we are very much trying to use predictive policing," Trent said.

But police say it's not that easy. While trends develop, to predict crime is nearly impossible.

Many would say the area surrounding Riley High School is a pretty good neighborhood.

During the 30 days we examined, that neighborhood had 11 assaults, six home break-ins, and three home break-ins where a weapon was used.

"We need a little more action from somebody, police, somebody to keep these kids, keep everyone in line," Carter said.

We noticed increased crime numbers up and down Western Avenue and Lincoln Way West, known trouble areas for police.

Western Avenue, from Chapin Street to Mayflower Road there were nine reported home break-ins and 22 assaults.

"A lot of that is tied to the fact it's foot traffic. There's definitely people out there that are doing things they shouldn't be doing," said Trent.

Common Council President Oliver Davis said that over the years incentives to have police officers live in the city have been cut from the budget but he doesn't think that's the answer anyway.

"I think that officers living in the city can be a benefit, however, we have to look at what the state law is. I think more police on the beat would probably be better," said Davis.

Indiana state law says that police officers can't be forced to live in the city they work.

Davis said the answer is more police on the beat.

"We have a minimum of 19 have to be on any kind of beat at the present time and I think we need to increase that number," said Davis.