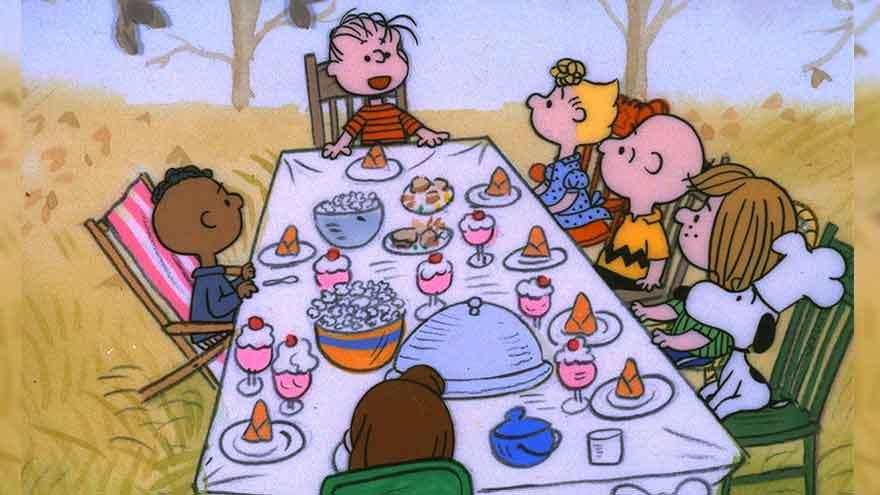 ABC celebrates the joy of the holidays with Thanksgiving-themed episodes and specials.

THE MIDDLE – “Thanksgiving IX” – The Hecks take a hectic road trip for Thanksgiving to Frankie’s sister’s house but soon find themselves running into barriers that could make them late to the feast; and with Axl now working with Sue and Brick at Spudsy’s, they have been informed by their manager that, due to budget issues, one of them needs to quit, and they must decide amongst themselves which one will take the hit. (8:00-8:30 p.m.)

FRESH OFF THE BOAT – “The Day After Thanksgiving” – The  Huangs’ idea to skip Thanksgiving this year doesn’t last long when Louis plays matchmaker and invites Grandma’s ESL teacher, Bernard, to dinner after he notices their flirtation in class. To Jessica’s amazement, Grandma Huang offers to cook the entire meal to show her appreciation. Meanwhile, to prove his maturity, Evan lets Eddie and Emery sneak him into his first R-rated movie. George Takei guest stars as Bernard. (8:30-9:00 p.m.)

THE GOLDBERGS – “A Wall Street Thanksgiving” – During the holiday, Uncle Marvin reveals he has become a stockbroker and convinces Barry and the JTP to invest their money with him.  Murray intervenes which has repercussions for Barry.  Meanwhile, Erica tells Geoff she is in debt and gets swept up in the family investment.  Later, Beverly invites 50 people over for a Thanksgiving potluck instead of stressing out cooking for the family, but the plan backfires and Beverly realizes some traditions shouldn’t change. (8:00-8:30 p.m.).

SPEECHLESS – “B-R--BRITISH I-N--INVASION” – Maya’s best attempts to present the perfect Thanksgiving Day backfire when her imposing and regal mum, Andrea, visits from London for the holiday.  A failure to complete a traditional DiMeo power-eating challenge sends Jimmy into a tailspin, and his brother, Billy, comes to the rescue.  Kenneth dreads spending Thanksgiving with his overbearing father, the Colonel, and it doesn’t take long to realize why when the pair shows up to dinner unannounced. Holland Taylor, Rob Corddry and Keith David guest star.  (8:30-9:00 p.m.)

MODERN FAMILY – “Winner Winner Turkey Dinner” – During Jay’s Thanksgiving toast he honors the entire family on their recent successes, even though everyone knows that isn’t quite true. As everyone desperately tries to hide the facts about their perceived triumphs, Phil works hard to master a classic magic trick and prove he’s not the family failure.  (9:00-9:31 p.m.)

AMERICAN HOUSEWIFE – “Family Secrets” – Greg makes big plans to impress his parents (Julia Duffy, Barry Bostwick) when they visit for Thanksgiving, but his vision is shattered when his neighbor Spencer (George Hamilton) and Katie’s mom Kathryn (Wendie Malick) arrive unannounced and nothing goes as he intended (9:31-10:00 p.m.).

A CHARLIE BROWN THANKSGIVING – In the 1973 special, “A Charlie Brown Thanksgiving,” created by late cartoonist Charles M. Schulz, Charlie Brown wants to do something special for the gang. However, the dinner he arranges is a disaster when the caterers, Snoopy and Woodstock, prepare toast and popcorn as the main dish. Humiliated, it will take all of Marcie’s persuasive powers to salvage the holiday for Charlie Brown. A special bonus cartoon from Charles M. Schulz, “This Is America, Charlie Brown: The Mayflower Voyagers,” will air with the PEANUTS classic, in which history comes to animated screen life in a captivating and informative program about the Mayflower voyagers. The special will air with Spanish audio via SAP. In “This is America, Charlie Brown: The Mayflower Voyagers,” the year is 1620. After 65 grueling, sea-tossed days, the Pilgrims are in view of America’s shores – and Charlie Brown and the Peanuts crew are with them as they experience firsthand the lifestyle of the early settlers and celebrate the first Thanksgiving. (8:00-9:00 p.m.)

Yes-vember! All month long “The Chew” is saying yes! Can I make that Thanksgiving turkey for the first time? YES! Can I wow my friends and family with the most spectacular Turkey Day dishes ever? YES! Yes-vember is the month to celebrate delicious food. Become empowered in the kitchen and treat yourself! Co-hosts Mario Batali, Michael Symon, Clinton Kelly and Carla Hall will be your expert guides for all of your Thanksgiving essentials from a “Back to Basics Turkey Lesson,” “The Greatest Sides in History,” a leftovers special with Chew super fans and so much more!

It’s time to get into shape for the big event with a week-long Thanksgiving cooking school that America is begging for with our “Turkey Day Training.” Hosting Thanksgiving for the first time can be intimidating, and one lucky viewer will receive all the tools they need to make their holiday a festive culinary success, and “The Chew” celebrates Veterans Day as Michael Symon cooks with a vet, Jenny Pacanowski (Bethlehem, Pennsylvania).

Do the celebrities visit the most delicious show on daytime to celebrate Thanksgiving? YES! This month, we welcome a star-studded lineup, including Ellen Pompeo, Guillermo Diaz, Amy Sedaris, Whoopi Goldberg, Josh Hutcherson, Nia Vardalos and Olivia Newton-John. Is this going to be a November to remember? YES!

The holidays are a time for reflection and revelation, and this season promises to be no different. With the return of at least one familiar face, viewers can expect a little chaos stirred up by the Quartermaine and Corinthos clans, all in time to shed a little light on what the holidays mean to those in Port Charles.

Today 39° Mix of rain and snow