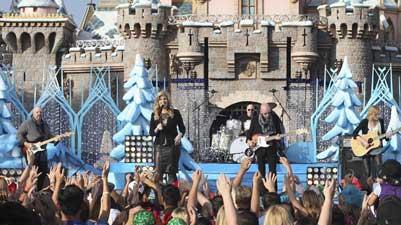 9 p.m. CMA Country Christmas – (Repeat) Some of the biggest names in music will come together to celebrate the holidays on “CMA Country Christmas,” a two-hour special hosted for the fifth year by Jennifer Nettles. The special is a celebration of the season featuring some of the top stars in music performing holiday songs and getting into the Christmas spirit. Artists already announced include Dan + Shay, Brett Eldredge, Sara Evans, Lucy Hale, Hunter Hayes, Little Big Town, Idina Menzel, Jennifer Nettles, LeAnn Rimes, Michael W. Smith, and Carrie Underwood.

MONDAY, DECEMBER 22
8 p.m. The Great Christmas Light Fight – Season Finale – Each of the six one hour episodes features 4 families from across America who work harder than Santa's elves in order to out-deck the halls of their competition and possibly win the ultimate Christmas Gift--$50,000! The total prizing for the series is $300,000. Michael Moloney & Sabrina Soto (both from Extreme Makeover: Home Edition) return as judges for the series.

TUESDAY, DECEMBER 23
8 p.m. Shrek the Halls – DreamWorks Animation's Shrek the Halls, a half-hour of entertainment starring America's favorite ogre and his friends and featuring the voices of Mike Myers, Eddie Murphy, Cameron Diaz and Antonio Banderas. Just when Shrek thought he could finally sit back, relax and enjoy his happily ever after with his new family, the most joyous of all holidays arrives. It's Christmas Eve and everyone is filled with holiday cheer -- except for Shrek. He isn't exactly the picture of yuletide joy, but for the sake of Fiona and the kids, he tries to get into the spirit of things as only an ogre can. Unfortunately, everyone seems to have their own ideas about what Christmas is all about, so when Donkey, Puss In Boots, Gingerbread Man and the whole gang try to join in on the fun, Shrek's plans for a cozy family celebration end up spiraling into one truly unforgettable Christmas.

8:30 p.m. Toy Story That Time Forgot – (Repeat) Pixar Animation Studios' second new special for television, Toy Story That Time Forgot, a World Premiere Holiday Event, will feature your favorite characters from the “Toy Story” films. During a post-Christmas play date, the Toy Story gang find themselves in uncharted territory when the coolest set of action figures ever turn out to be dangerously delusional. It's all up to Trixie, the triceratops, if the gang hopes to return to Bonnie's room in this Toy Story That Time Forgot. The cast of Toy Story That Time Forgot includes Tom Hanks as Woody, Tim Allen as Buzz, Kristen Schaal as Trixie, Kevin McKidd (Grey's Anatomy) as Reptillus Maximus, Wallace Shawn as Rex, Timothy Dalton as Mr. Pricklepants, Don Rickles as Mr. Potato Head and Joan Cusack as Jessie.

THURSDAY, DECEMBER 25
10 a.m. Disney Parks Frozen Christmas Celebration -- Music, magic and merriment come together when Disneyland Resort in California and Walt Disney World Resort in Florida present the 31st annual Christmas Day parade and TV special. The star-studded sounds of the season include some of today's top musical talents lending their voices to celebrate the holidays. And, from fairy tales to classic Christmas carols, Disney friends and holiday characters spread joy and good tidings through Disneyland Park in California and the Magic Kingdom Park in Florida. This year promises some extra Frozen fun with fanciful floats and colorful cavalcades as Santa Claus himself along with his reindeer, wend their holly jolly way down Main Street, USA.

8 p.m. How The Grinch Stole Christmas Special – Based on the classic children's book by the legendary Dr. Seuss, this special takes viewers inside a snowflake to Whoville, the magical land of the Whos. But high above this holiday-loving town resides the Grinch, a hateful creature with a heart three sizes too small, who despises Christmas and plots to steal it from the Whos.

8:30 p.m. Dr. Seuss' How The Grinch Stole Christmas – The 1966 animated holiday story loved by all, tall and small. Based on the classic children's book by the legendary Dr. Seuss, Dr. Seuss' How the Grinch Stole Christmas, takes viewers inside a snowflake to Whoville, the magical land of the Whos. But high above this holiday-loving town resides the Grinch, a hateful creature with a heart three sizes too small, who despises Christmas and plots to steal it from the Whos. Will a greedy Mayor Augustus Maywho or the seductive Martha May Whovier ruin his plans? Or will the loving little Cindy Lou Who be able to teach The Grinch the true meaning of Christmas? The voice cast includes Boris Karloff as The Grinch/Narrator and June Foray as Cindy Lou Who.

MONDAY, DECEMBER 29
8 p.m. Happy New Year, Charlie Brown -- The ABC Television Network and the PEANUTS gang will ring in the new year with the animated PEANUTS special, Happy New Year, Charlie Brown, created by late cartoonist Charles M. Schulz, along with She's a Good Skate, Charlie Brown. In Happy New Year, Charlie Brown, the PEANUTS gang is ringing in 1986 and Marcie and Peppermint Patty are throwing a big New Year's Eve bash. Charlie Brown plans to celebrate the holiday by curling up with a big book that weighs nearly as much as he does, Tolstoy's War and Peace. The book's weight doesn't stop him from lugging it to Lucy's pre-party dance class, where he cuts a mean rug with a rollicking Patty. With just 1131 pages to go, Charlie Brown takes another break, this time for the party, and summons the courage to invite his true love, the little red-haired girl. She doesn't respond, but hapless Chuck shows up anyway – with Tolstoy in tow. Then, he settles down with the book – on a porch swing in a snowstorm, and in so doing, misses the evening's big surprise. In “She's a Good Skate, Charlie Brown,” disaster strikes as Peppermint Patty heads to her first major ice-skating competition with coach Snoopy and faithful companion Marcie by her side. As always, the unassuming Woodstock flies in to save the day.

WEDNESDAY, DECEMBER 31
8 p.m. Dick Clark's Primetime New Year's Rockin' Eve with Ryan Seacrest 2015 -- Before the ball drops on New Year's Eve, global music sensation Taylor Swift will culminate another record-breaking year with a performance of her hit songs for over 1 million fans in Times Square live on ABC's telecast. Swift will join a stellar line-up of the year's top music artists in celebrating the New Year during the biggest live music celebration in show history with over 38 performances and 5½ hours of music. The bi-coastal celebration will include hours of special performances and reports on New Year's celebrations from around the globe, and Ryan Seacrest will lead the traditional countdown to midnight from Times Square in New York City as he has for the last 9 years.