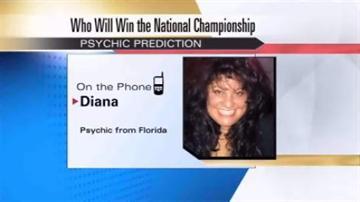 On nearly every corner in Fort Lauderdale, Miami and South Beach, you’ll find crystal ball readers, palm readers and psychics. ABC57 set out to find out who the psychic predicts will win the national championship.

After speaking to about 15 psychics, none would speak on camera to discuss who they predicted would win.

Finally, we got through to Diana from a local psychic agency.

We asked who would win the game.

“It’s going to be a tough game, but I don’t know anything about it. So I’m going to say Alabama definitely has this,” she said.

Diana admitted she doesn't follow college sports and didn't know who was playing in the championship game.

She says she meditated on it for 20 minutes and the win went to Alabama each time.