ABC57 in Tampa: Irish having fun this season 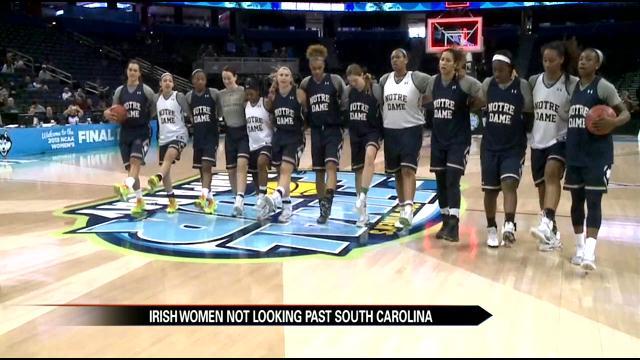 The Notre Dame Women's Basketball team hit the court Saturday at Amalie Arena for practice as they prepared for Sunday's semifinal game against the South Carolina Gamecocks.

Players and coaches say last year they were all about business. Although that still rings true, they say they are having a lot of fun this time around and playing looser with a little less pressure than some years' past.

"Because we're so young and people didn't really expect a lot from us. I think we're playing without a lot of pressure. We're just going back out there and showing what we can do and just playing and I think that's a good thing," said Irish Forward Taya Raimer.

This season, the Irish have again proven they're more of a powerhouse than an underdog.

"It's great for Coach McGraw and the entire program to see that we can rebuild every year and we can get back to the Final Four," said Natalie Achonwa, a former Irish player.

As they embark on a new Final Four journey, with a new and much younger team, the Fighting Irish say there's one reason for this year's success.

"It's difficult for some of the younger players to figure out how to have fun and enjoy it but give me that intensity when we step on the court and the older players know how to do that. So it should be interesting to see if the young ones can pick that up," said Irish Head Coach Muffet McGraw.

It's that less business, more fun attitude, that they hope will help them move past South Carolina and earn a shot at playing in another National Championship game.

"They have great guards and great posts so we're going to really have to play the way we've been playing if we want to win," said Irish Guard Michaela Mabrey.

This is the seventh time in the program's history that the Notre Dame Women's Basketball team will play in a Final Four.

The Irish are the fourth team in Division 1 NCAA history to make five Final Four appearances in a row.

The Fighting Irish will take on the South Carolina Gamecocks Sunday night at Amalie Arena in Tampa, Fla.