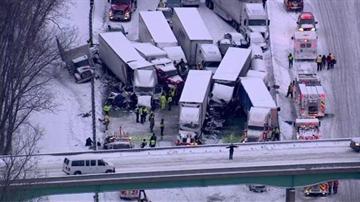 MICHIGAN CITY, Ind.-- Two weeks have passed since tragedy unfolded on I-94. The pile-up took the lives of three people and injured dozens. Victims are now on the road to recovery, but could this pile-up have been prevented?  ABC 57 investigates whether truck drivers are complying with federal rules when conditions turn bad, or whether they're big rig rule breakers.

Jeff Rennell vividly remembers his casual afternoon drive that ended in a massive pile-up on I-94.

“When I left Chicago, it was a perfectly sunny and bright and beautiful day and just that patch was really, really bad. But besides that, you would never know what you were going to drive into," said Rennell.

Rennell drove straight into the back of a semi. At the time, he was unaware that another 17 semis and 27 cars were sliding out of control behind him. Rescue crews worked for three hours to free Rennell from his crushed Ford Explorer.

The massive pileup was difficult for police to investigate.

They still don't know an exact cause, but personal injury attorney Kenneth Allen says he’s seen pile-ups like this play out thousands of times before.

Allen says he is a passionate advocate for commercial truck safety and wants to draw attention to a federal regulation that requires truck drivers to slow down when the weather deteriorates – and even pull over when it’s just too dangerous.

"In the past situation on I-94, both traction and visibility were impaired," said Allen. "And that should of immediately signaled to these truckers that they must pull over until one or the other is cleared up."

But ABC 57 did some investigating and found out no one enforces this potentially life-saving federal requirement. Not even police.

“We don’t want to stop those big trucks when there’s bad weather just because it creates a hazard for the public, because now they have an obstacle they have to drive around," said Steven Spallinger, commercial motor vehicle enforcement, Indiana State Police.

Officer Spallinger says it’s a nice idea, but driving past parked semis creates another safety hazard- one he's all too familiar with on the shoulder of the interstate.

"The problem that we have with truckers is they have to find some place safe to stop too. They can't just pull over on the side of the road and park or onto a ramp, because if they're going to do that then we're going to tell them they have to move," said Spallinger. "Because we're trying to clear snow, or the snow plows are trying to clear snow and now they're a hazard for that as well."

And if police aren’t enforcing the law, then who will? Some truckers off the interstate told me they know better.

“There is a lot of pressure," said truck driver Kevin Eason. "We do have time schedules, but when weather is like this, companies do understand that it is about safety.

“It’s just part of being a truck driver- when you have bad weather," said Jerome Higgins, truck-driver. "The thing is you just have to be more careful.”

And many truckers are careful. The American Truckers Association says crashes have dropped thirty-three percent in a ten year span.

"We have to share the roads with those guys," said Rennell.  "They have to be out there. As much as you'd like to say you'd like to make it perfect where everything's safe, it's just that doesn't happen."

Allen says it can happen and it should.

"I think other states that have a stronger priority for truck safety, Illinois for example, have more troopers trained and able and actually enforcing these truck safety regulations," said Allen. "The whole key is prevention and the rules and the laws are in place. If they're enforced they will prevent these things from occurring again."