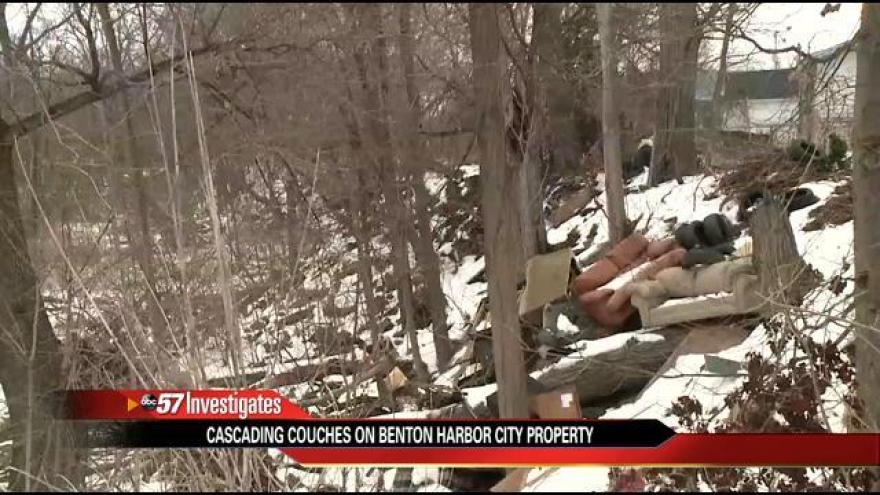 People are illegally dumping junk and trash on city property in Benton Harbor. City officials said it has been going on for years in the ravine near LaSalle Street and Pasadena Avenue.

A man who lives by the ravine where people are dumping old furniture said he can hear people trespassing onto his property in the middle of the night.

Tyrone Adams said, “In summertime you can smell it, you got all types of animals, possums, raccoons, and everything coming from out there. I can't even let my daughter come out here and play in the driveway.”

A fake five dollar bill among other things were scattered across the incline.

Adams said, “Every summer somebody come through here and dump their leaves right up in there. And now they're putting tires and chairs and tables, everything.”

Adams said, “I think it's sad because when you go out of town and go back and you see your city all tore up and dirty in several places and then you come home, and you gotta look at this every day, that's not cool.”

Van Thornton, the building official and zoning administrator in Benton Harbor issued a statement on Friday

Thornton said, “In the case of city owned properties, the locations are compiled on a‘debris removal list' and the Department of Public Works abates the violation when their schedule permits. This is an ongoing concern that the city is aggressively dealing with.”

Police said they've tried putting a hidden camera in that particular ravine to catch the people who are dumping junk there.

Kala Sanders said, “You got this area right here, you've got over on John Street, you've got down on LaSalle, over by the corner store, just general dumping areas. You can see them from the road, kinda like an eyesore.”

As a taxpayer, Sanders said the problem is two-fold. He thinks the city should clean it up, and citizens should stop dumping the trash there.

Sanders said, "They used to have like a spring cleanup thing, where you would sit everything out that you need to set out, maybe a couple more of those a year would prevent stuff like this from happening.”