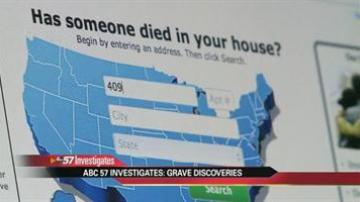 MISHAWAKA, Ind. -- Buying a home is probably the biggest purchase you'll make. There are many things you should ask your agent about - like if the roof is good, whether the foundation is solid and if there's a big back yard. But have you ever asked what happened in the house before making that offer? You probably should.

Just behind the train tracks in Mishawaka is a house with a history.

If the walls could talk they might tell a story of death.

"My mother in law died right by this window where you are sitting with lung cancer back in 84," said homeowner Curtis Wright. "Also the original owner that lived here died in my bedroom."

And an 84 year woman old passed in her sleep.

"My grandmother died in that bedroom over there," said Wright.

"Oh all kinds of weird stuff, like someone's walking around upstairs," said Wright. "This room here is the one where the TV turns on and off. Even if it's not plugged in."

None of it bothers Wright, but he can see how it would bother a future home buyer.

"Some people don't want to live where other people have died in the house," said Wright.

Would you want to know the history of a home before you signed on the dotted line.

It's called diedinhouse.com. It's $12 a search.

"Of course you wonder a little bit but I think it is an out of sight out of mind kind of thing," said Trish Gardini.

Gardini can't help but wonder about the past of her future home.

"If someone passed away of old age I think it would be not as big of a deal as murder suicide or a homicide," said Gardini.

At 901 Dayton Street, a man was found murdered and stuffed into a chest.

"I think it's great to give people knowledge," said realtor Jan Lazzara of Cressy Everett.

Lazzara does her best to keep creeped out clients in the know.

In Indiana, the law is loose and the burden is on the buyer to ask.

"It is not required by law to disclose but I always feel it's better to disclose if we know and as long as we have the seller's permission," said Lazzara.

She says you should ask neighbors, who often know more than most websites.

We asked a neighbor on Dayton Street.

"I would tell them his daughter hung herself and a couple months after that he got murdered," said the neighbor.

In case you're a skeptic, superstitious or just plain spooked out know that homes have a beginning and all homeowners have an ending.

Whether peaceful or tragic the story is no longer buried 6 feet under. It's one click - and $12 away.

When you research an address, the website will tell you any previous residents who have died, their date of death and if it happened at the house.

Then you can take that information and do a quick search to find the nature of the death.

The creator wouldn't give us their exact sources, but said they use a wide range of public and private databases to research addresses.