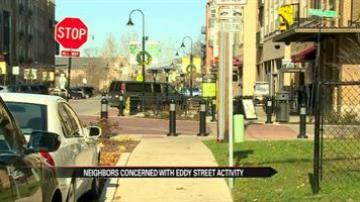 SOUTH BEND, Ind. -- The Eddy Street Commons area is a destination for people hungry for good food and shopping. But lately residents say it has become a hot bed for violence after dark.

Residents say they're worried because the violence keeps happening right around the time the bars close.

We got a hold of the number of times police have responded to the 12 bars in the area between January and October.

"We had a shooting right outside of our house here a few months back on this corner," said Dorothy Ranaghan.

"Other than the shooting, we did have someone unload their gun walking down the street just for the fun of it," said Stephen D'Ambrosia.

Gunfire does not fit the vibe on Vincent Street, an upscale neighborhood located less than a mile from four popular bars.

Over the past ten months, police have responded to Brothers 105 times, O'Rourke's 30 times, the Linebacker 33 times and Mulligans less than ten times.

"We do not object to the Eddy Street Commons itself or to Brothers. We find having that kind of neighborhood is actually an enticement to stay here," said Ranaghan.

She just wants the violence to leave.

D'Ambrosia votes for a parking change.

"Our streets around the area are filled with cars and people constantly working over there, and come 3 am when the place closes everybody's heading back to their cars," said D'Ambrosia.

Of the 105 calls to Brothers' this year, 21 were for stolen purses, wallets and electronics inside parked cars.

You may recall a newspaper article citing all the police calls to Brothers. The owner of Brothers Bar, Mark Fortney, spoke to us over the phone and said those numbers are skewed

He said he wants to set the record straight.

"The majority of those calls are good calls. We have a "call early and call often" policy at every bar," said Fortney.

The officers on Eddy Street after hours are paid directly by Brothers.

Recently, two more officers have been added to the after hours patrol.

"That's their side job. They're in a business relationship with the bar," said Captain Phil Trent of the South Bend Police Department.

Kite Realty, the owner and investor at Eddy Street Commons says it's definitely aware of the higher than average police calls.

They will send representatives to Wednesday night's public meeting.