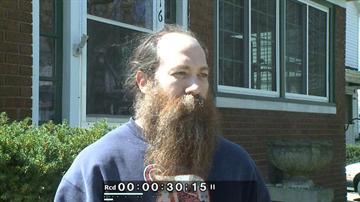 NILES, Mich. - A man claims that he was beaten in the back of the head by a Niles police officer on Saturday night.

William Parker told ABC57 News on Sunday that his mom had a seizure. When an ambulance arrived to take her to the hospital he wanted to ride along to be with her. For some reason Parker was denied access to go with the ambulance to the hospital.

Parker who became very upset was standing on a few stairs leading up to the house at the time. According to Parker and several witnesses an officer with the Niles Police Department tased Parker at least three times.

Parker said he lost control of his body at the time he was tased and fell off the stairs that he was standing on. According to Parker his elbow accidentally struck an officer as he fell onto his stomach to the ground.

He claims that's when an officer pulled out his flashlight and hit him five times in the back of the head.

Parker was taken to the hospital and received staples to his head for his injury. Now, he is speaking out saying that this was an act of police brutality.

Witnesses told ABC57 News that they were outraged with the way that officers acted on the scene.

ABC57 News reached out to the Niles Police Department, we were told by the Public Information Officer that the department wont comment on the situation until Monday.

No names of any of the officers responding to the medical call have been released.

ABC57's Jessie McDonough will have the entire story tonight at 6:30 p.m. Hear from Parker himself about how this all unfolded.