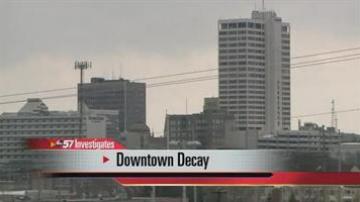 SOUTH BEND, Ind. -- It's the tallest building in South Bend, and some might say, Michiana's only skyscraper. After 3 years in receivership, the Chase Tower is heading to a sheriff's sale later this month. A potential buyer could scoop it up at a discounted price, but what would they be getting?

In recent years, there's been a renewed interest to revitalize Downtown, and yet, the building's future has never been more up in the air - or down in the dumps.

The building has been neglected for the last three years after the owner, Dillingham Real Estate LLC., fell behind on its mortgage payments.

"Safety-wise, we feel safe here," Jordan McCormack, a tenant on the 24th floor, said. "We think it's efficient for that, but definitely the conveniences you would expect in an office building sometimes are not there."

McCormack works for American Structurepoint. He and other employees there love the views and central location.

It's just the leaky pipes, along with rusty walls and sluggish elevators that keep him renting month to month.

"We understand it's the economics of it; owners only have so much money to spend on a building, but it really needs the improvements."

The latest Code Enforcement inspection reports obtained by ABC57 News show violations in the building's parking garage, where some sections are 'no longer securely or safely anchored.'"

One estimate puts the repair costs at over $1 million.

We found potential violations on the inside that could pose a risk to those who work there - things like electrical wires next to faulty pipes, mold and walls that may contain asbestos.

ABC57's Daryl Bjoraas tried calling and emailing Code Enforcement to talk safety concerns. A week went by without a response, so he stopped by in person.

But County Treasurer Mike Kruk is qualified to talk about the building's financial challenges.

The County is still owed more than $400,000 in unpaid property taxes.

"Why just dig yourself a deeper hole?" Kruk said.

And it's a deep hole.

The building that used to be worth nearly $9 million is valued at almost $6 million today. With debts in the $7 million range, the owner owes more than the building is worth.

"It's got value in it. It's just a matter of finding the right group of people to purchase it," Kruk said.

"We have to continue to hold out and have discipline until we get the right kind of future set up for the Chase Tower," South Bend Mayor Pete Buttigieg said.

Mayor Buttigieg said the city is willing to offer help in the form of public money, but wants to make sure it's awarded to a trustworthy buyer.

For tenants like McCormack, that can't come soon enough.

"We would like to stay here, but like I said, we have to look at the options that are available out there," McCormack said.