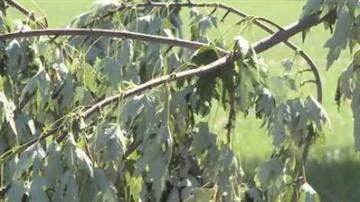 SOUTH BEND, Ind. -- While this week's series of storms were ripping through the area, one business may have been ripping people off.

In the last 36 months, the BBB has logged 7 complaints against Joe Cruz Tree Service, all without a response.

"We definitely have more businesses that do respond, than do not," Jensen said.

People called ABC57 News complaining. They said Cruz was paid to do work, but didn't finish the job, leaving them stuck not only with broken branches, but with empty pockets.

So we went searching for answers as to why.

We went to his last known business address on Chapel Lane in South Bend. It was an abandoned house, and the phone number listed for Cruz's business was disconnected.

Neighbors told us the Joe Cruz lives with his parents on Filmore Street; something a woman who identified herself as Cruz's sister confirmed.

After talking to her for several minutes, she said she didn't know how to get a hold of him, but understood why we were trying.

"I understand where those people are coming from exactly," she said. "I mean, there's only one side, and they're right."

After visiting his parent's house, Joe Cruz called ABC57 News. He denied any wrongdoing, saying he hasn't been in business for at least 3 years. When told about multiple complaints filed against his business within the last year - both in small claims court and through the BBB, he said it must've been someone else.

Cruz's family wanted it to be absolutely cler, they are not involved with Joe Cruz's Tree Service. ABC57 News just went to them for additional information.

We did check with the City of South Bend, and found that his business is unlicensed, unbonded and uninsured.