About 100 kids get married in Benton Harbor 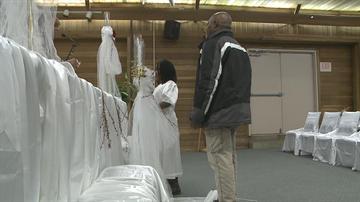 BENTON HARBOR, Mich. – Close to 100 kids, dressed in all white, got married at the Salvation Army building on Saturday. Boys and girls from just seven to 18-years-old slid silver bands onto their ring fingers in front of their families.

“These are the really cool rings and we’re excited cause every parent or guardian, pastors will be putting the rings on the babies fingers.”

Bonita Mitchell said some of the kids did get cold feet right before the ceremony, “I had a little 7-year-old girl say 'I don’t want to get married today.'”

Like any marriage, Mitchell, the Executive Director of the “I’m Saving Myself” program said this is a very big commitment but one these kids are ready for.

“We’re going to get married,” 10-year-old Ja’Leahha Johnson said. When I asked to who, she and her 7-year-old friend, Adila Knott replied in unison “To God.”

Mitchell said with rings, the vows and the ceremony the kids make a promise, “Committing to at the end of the day they’re married before they have sex and start their families, so the family order of the Bible.”

The cycle needs to be broken, Mitchell said. Too many kids are having kids in Benton Harbor, way before they are married.

“Teen pregnancy is absolutely huge, it’s on the rampage we have kids getting pregnant as early as 10 years old.”

This is why Mitchell said kids as young as seven-years-old are now a part of the “I’m Saving Myself Program,” to teach the children to abstain from sex before marriage.

Johnson and Knott did not know the meaning of the word abstinence, but 7-year-old Knott said she did know this about sex, “You should only do it after you’re married.”

So until then, Mitchell said the kids will be married and committed to God, “We’re giving them someone higher that they can look up to that will never leave them and they can make sure to keep their bodies pure.”

The “I’m Saving Myself” program has been in Benton Harbor for 13 years but this is the first time in six years the group has held a marriage ceremony. Mitchell said parents in the community asked the program to marry their kids in an effort to fight the high teen pregnancy rate in the area.

According to Mitchell, the last group of kids to pledge their purity has been fairly successful, of the kids 17 kids who put rings on their fingers six years ago, only two have gotten pregnant.