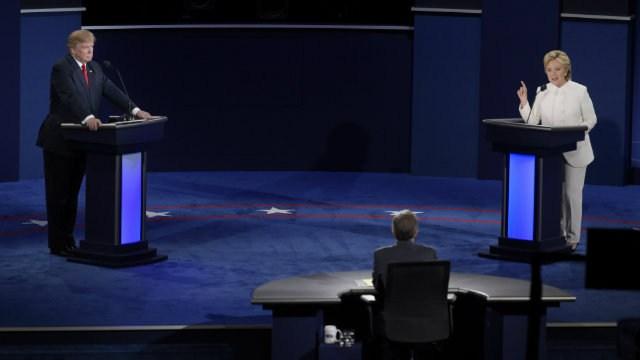 NEW YORK (CNNMoney) -- About 71.6 million people tuned in for the third and final presidential debate of the year.

The total audience was smaller than the first Trump-Clinton face-off on September 26, but bigger than the rematch on October 9.

Reflecting the intense interest in this election, Wednesday's debate was significantly higher-rated than the final debates of the 2008 and 2012 cycles.

According to Nielsen, 12 channels that carried the debate averaged 71.6 million viewers altogether.

Some other channels, like C-SPAN, are not rated by Nielsen. Internet live streams are measured separately.

Clinton and Trump's first debate averaged 84 million viewers via TV -- setting a new TV record. The rematch averaged 66 million. The decline was partly due to competition from "Sunday Night Football."

On Wednesday night, there was no NFL competition, but there was a highly anticipated Cubs-Dodgers playoff game.

The debate was moderated by Chris Wallace of Fox News, marking the first time that a Fox journalist led a general election debate. Fox's extensive promotion paid off: the channel's coverage of the debate averaged 11.3 million viewers, out-rating its rivals.

CNN was close behind Fox in the key demographic of 25- to 54-year-olds, and topped Fox in that demo after the debate.

Nielsen metrics showed relatively steady viewership throughout the 90-minute debate, with just a small amount of drop-off in the 10 p.m. hour.

According to Facebook, there was slightly less online chatter about the debate this time around.