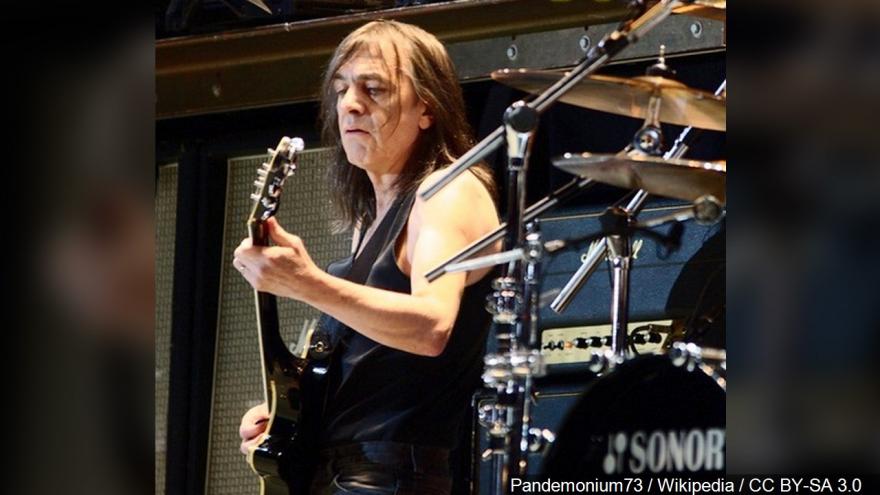 (CNN) -- AC/DC co-founder and guitarist Malcolm Young has died after battling dementia for several years, the band announced Saturday. He was 64.

Young died at home with his family at this bedside, the band said in a statement.

Young, along with his brother Angus, founded the legendary rock band in 1975 in Australia.

"Renowned for his musical prowess Malcolm was a songwriter, guitarist, performer, producer and visionary who inspired many," the statement said. "From the outset, he knew what he wanted to achieve and, along with his younger brother, took to the world stage giving their all at every show. Nothing less would do for their fans."

Young played rhythm guitar to Angus' lead, and his driving riffs and mop-top hair were signatures of the band's sound and image for decades.

Angus Young, in a separate statement added that Malcolm took "great pride in all that he endeavored."

"His loyalty to the fans was unsurpassed," he wrote. "As his brother it is hard to express in words what he has meant to me during my life, the bond we had was unique and very special. He leaves behind an enormous legacy that will live on forever."

Young left AC/DC in 2014 after the band said he had been struggling with an undisclosed ailment, later revealed to be dementia. He was replaced by his nephew, Stevie Young, for the band's world tour in 2015.

"He was older than me -- I always looked up to him," Angus Young said of his brother in an interview last year with Rolling Stone Magazine, saying he was "always one to battle through."

"He would look at me in times of crisis and go, 'We'll just go in and do some work. We'll sit and write some songs,'" he said. "He had that drive, and I feel obligated to keep it going, maybe because I was there in the beginning with him."

AC/DC was inducted in 2003 into the Rock & Roll Hall of Fame, which described its sound as "scorched-earth, metallic hard rock which has rarely deviated from a template of headbanging-inducing guitar riffs, flashy drums and banshee-yell vocals."

"In the process, AC/DC have carved out a niche somewhere between hard rock and heavy metal that's been an inspiration to aspiring musicians -- and given us crank-up-the-volume radio staples 'Back In Black,' 'Highway to Hell' and 'You Shook Me All Night Long,'" the hall of fame notes on its website.

The band is also one of the best-selling in music history, according to the Recording Industry Association of America, having sold more than 70 million albums in the US. The band's original lead singer, Bon Scott, died in 1980. He was replaced by Brian Johnson.

"RIP Malcolm Young," wrote singer-songwriter Ryan Adams. "He was the founding member of AC/DC & the engine that roared behind the most powerful band in the world." Guitarist Eddie Van Halen said "it is a sad day in rock and roll."

AC/DC plans to create a memorial website at which fans can send messages to Malcolm Young's survivors, including his wife, O'Linda; children, Cara and Ross; son-in-law, Josh; three grandchildren; and his sister and brother. The family asked that in lieu of flowers, fans donate to The Salvation Army.