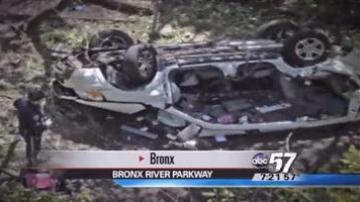 Bronx, N.Y.--A devastating accident has taken the lives of three generations of one family, and there is so much still unanswered.

Seven people, in one family were riding in the same SUV when the driver, 45-year-old Maria Gonzalez, some how lost control and plunged more that 50 feet off the highway.

The vehicle fell into a restricted part of the Bronx Zoo, but not near any animals or people.

Police said the Gonzalez was likely speeding an lost control.

Ray Kelly, a New York Police Commissioner said, "We believe that the driver may have struck the jersey barrier and reacting to striking the barrier the driver makes a sever right hand turn and goes over the side wall."

All seven family members were wearing seat belts and were pinned when the SUV landed upside down.