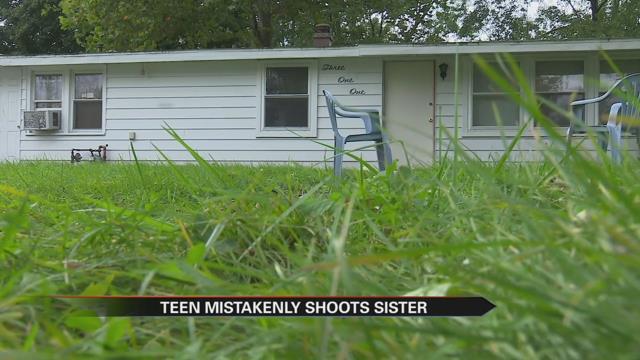 All that's left of Monday night's accidental shooting involving three kids, is a doll, on the ground at the foot of the family's home.

Elkhart Police Sgt. Chris Snyder says at 7:45 Monday night, a 14-year-old, 9-year-old, and 6-year-old, were home alone while their mom stepped out of their house on Carlton Street.

"They heard a loud banging on the door and someone yelling out in front of their residence, and that scared all three kids," Sgt. Snyder explains.

The 14-year-old was scared, and went to find his mother's gun to protect his younger siblings.  His little sister, startled him, when she wrapped her arms around his waist.

The gun went off, grazing the oldest and hitting the 6-year-old in the leg.

They ran a few houses down to their neighbor's, and she assisted them while they waited for authorities.

Snyder says that was the right thing to do.

"The kids did a great job," he says. "They did a good job of thinking, what do we need to do, and where can we go for help."

He believes their actions prevented a more tragic outcome, but that this should serve as a warning to other gun-owning parents.

"Parents [need to] understand the responsibilities that come with being gun owners," Snyder adds.

Elkhart Police say it's too early in the investigation to tell whether or not the mother will face criminal charges.  If she does, it could be considered neglect or recklessness.

A family friend told ABC57 that the 14-year-old is out of the hospital and is doing okay, and the 6-year-old girl was transferred to Ft. Wayne, to make sure the bullet didn't hit an artery.