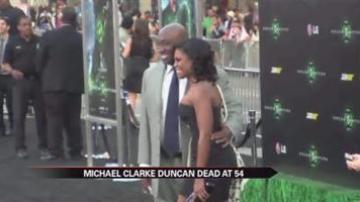 LOS ANGELES, Calif. -- The actor probably best known for his Oscar-nominated role in the film The Green Mile has died.

Actor Michael Clarke Duncan died at a Los Angeles hospital on Monday at the age of 54.

He appeared in dozens of films including Talladega Nights: The Legend of Ricky Bobby and The Green Mile. Duncan was mostly recently in the FOX series The Finder.