After decades on the table, plan to open McCoy Creek is approved 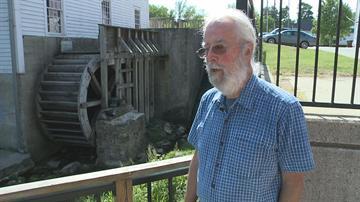 BUCHANAN, Mich. – A project decades in the making finally got approval to make some big changes in Buchanan on Wednesday, McCoy Creek will be changing in the coming months.

Since the 1940s there has been talk of removing the dam on McCoy Creek and opening up the waterway to allow both Pear’s Mill to run its wheel regularly and to make one of Southern Michigan’s best trout streams even better.

Serious efforts to allow the removal of the dam that creates the pond at the corner of Front Street and Red Bud Trail have been going on for the past few years.  Those plans stalled when the city, those in the historic preservation society and fisherman clashed over the best way to restore McCoy Creek.  Eventually all sides came together to come up with one plan to open up the creek, a plan that the state and the federal government have now approved.

“It was quite a sight and it will be again,” described Tom Fehlner, Chairman of the Watershed Advisory Committee and advocate of getting Pear’s Mill running again.  “For four years we haven’t been able to operate except when there’s been a lot of rain and the excess runoff goes into the mill race.”

Buchanan wouldn’t exist if not for McCoy Creek and the mills that once dotted its banks.  With final approval of the plan to get water flowing into the mill race again the last remaining mill and a piece of Buchanan history, dating back to either 1853 or 1857 depending on who you ask, will be rolling again.  The mill brings in at least 1,000 visitors a year and the sight of the old gears turning regularly could bring more.

But, there’s another potential tourism draw from opening up McCoy Creek.  The waterway is already considered one of the best trout fishing spots in Southern Michigan, removing the pond created by the dam will open up the water and cool it, which will make it an even better habitat for trout.  The plan is to make it even better through other work on the stream as part of the project.

Work on the McCoy Creek project could begin as soon as June and could be finished by next fall.