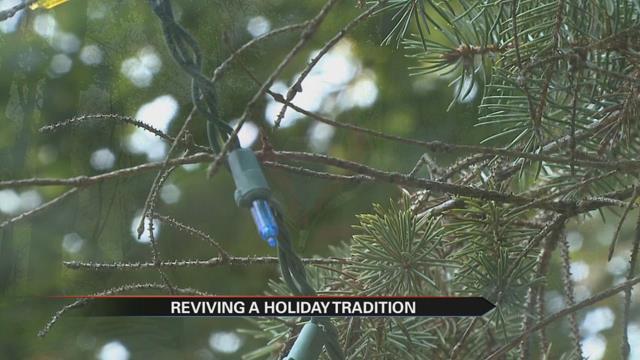 A neighborhood tradition literally turns back on after ten years. The Riverside Drive residents in South Bend didn’t think they would be able to light their local Christmas tree this year, but the odds were in their favor.

To celebrate this neighborhood tradition one child under the age of ten was randomly picked to push a button and turn on the tree, but all this wouldn’t have been possible without pulling a lot of strings.

“We ran into a little obstacle when we went to go decorate the tree because we had no working electricity in the outlet,” said Ed Talley the man who helped start this tradition in the early 1990’s.

Talley tested the outlet one day and it didn’t work, which is a big problem for a Christmas tree this size.

He called 311 first. From there he was transferred to three different city departments, but none seemed to know how to handle this situation.

“They weren’t real sure what to do so we got a hold of the Mayor,” said Talley. “We were a little nervous at first when we discovered the outlet wouldn’t work.”

Talley was a former founder of the historic district and to this day is heavily involved in the community. He says as soon as Mayor Pete got involved----

“The turnaround for the project took less than seven days. And the next thing you know we have a working outlet,” said Talley.

Talley explained new urbanism was the little hiccup in his tradition of the neighborhood Christmas tree, which is why it took him ten years to get everything going again!

During those ten years, neighbors here couldn’t wait to be part of this tradition once again.

“The tree is a great way to bring people together, especially at the time of Christmas, the holiday season,” said Daniel Philpott a Notre Dame Professor.

Philpott has been living in this area for 15 years. He says they all owe this great tradition to one person!

“We’re grateful for our neighbor Ed Talley, who is the historian of the neighborhood,” said Philpott. “This helps us to remember we do have a history.”

His daughter, Angela, says the tree couldn’t have come at a better time.

“It’s a nice way to bring Christmas to this neighborhood. I think the tree will be very beautiful lit up,” said Angela.

Talley said his hope is that the young child who got to light the Christmas tree will remember and cherish this experience for years to come.