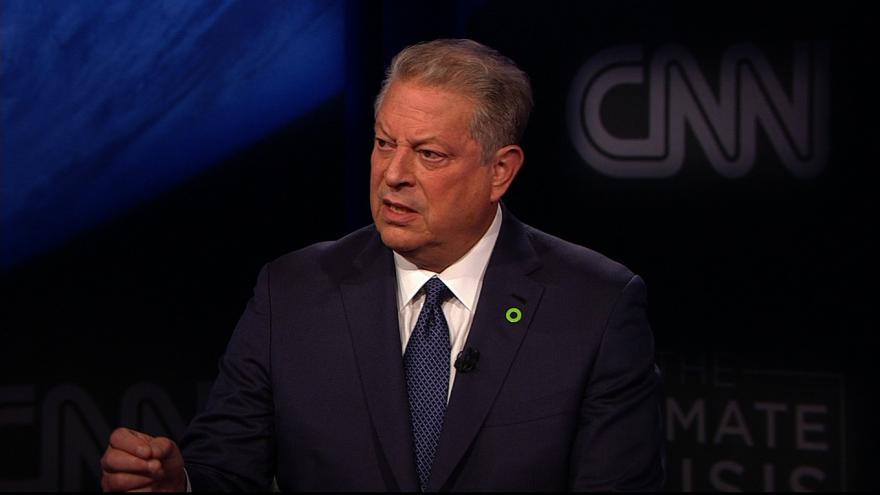 "I actually did feel there was a real chance that he might come to his senses and stay in the Paris Agreement," said Gore, who has spent years in pursuit of action on climate change and on Tuesday joined CNN for a town hall, moderated by Anderson Cooper.

Gore met with Trump after the 2016 election at the invitation of Ivanka Trump, and he spoke again with the President by phone in early May. But Gore's -- and Ivanka's -- influence clearly was not enough. After some delay, Trump announced in the Rose Garden in June that he intended to pull the United States out of the climate agreement.

Gore declined to get into the details of his private conversations with Trump, but said those conversations had left him with "reason to believe" Trump would keep the United States in the agreement, but added that thankfully his worst fears about the withdrawal were not realized.

"I was worried that other countries might use it as an excuse to pull out themselves," Gore said. "But I was gratified when the next day the entire rest of the world doubled down on the commitment to meet the terms of the Paris Agreement, and then in this country, so many governors and mayors and business leaders said, 'We're still in.'"

Gore said that even with Trump's decision, the United States could still manage to meet its own commitments under the Paris Agreement.

The town hall featured people across the country who challenged Gore on the issue or asked his thoughts. Mayor James Eskridge of Tangier Island, Virginia, said his home town needed a sea wall to fight erosion, but claimed sea-level rise was not affecting them.

"I'm not a scientist, but I'm a keen observer," Eskridge said. "And if sea level rise is occurring, why am I not seeing signs of it?"

Gore said he was aware of the town's situation, and said the town was losing ground to rising seas. Tangier Island gained national prominence after Trump called Eskridge in response to a CNN piece on the town.

"Arguments about science aren't necessarily going to be of any comfort to you," Gore said. "Won't necessarily do you any good for me to tell you that the scientists do say the sea level is rising in the Chesapeake Bay, and that you've lost about two-thirds of your island already."

Eskridge stood by his claim, saying, "If I see sea-level rise occurring, I'll shout it from the house top. ... I'm just not seeing it."

Gore said it was hard to translate what scientists said into something readily observable and believable.

"I try every day to figure out ways to do that," he said.

Gore warned there could be visible signs of a changing climate, including stronger hurricanes due to rising ocean temperatures.

"As the oceans get warmer, these ocean based storms get a lot stronger," he said. "There may not be more hurricanes, but the ones that do come are on average likely to be much stronger."

However, Gore insisted that there is still time to act, despite challenges that may lie ahead "in adapting to what we can't avoid."