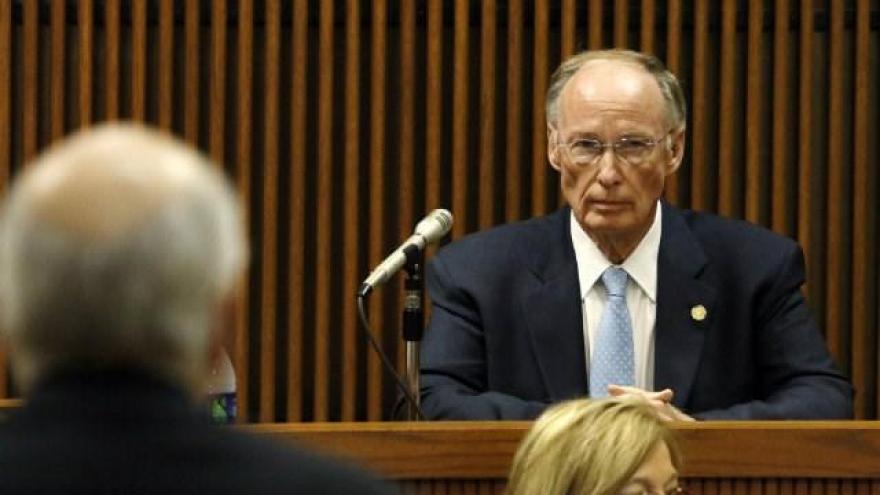 (CNN) -- Alabama Gov. Robert Bentley resigned Monday in the face of impeachment hearings over allegations that he tapped state resources to facilitate and hide an extramarital affair with a former aide.

Bentley made the announcement, effective immediately, shortly after he was booked into Montgomery County Jail and pleaded guilty to failing to file a major contribution report, a misdemeanor, and knowingly converting campaign contributions to personal use, also a misdemeanor.

Under the terms of his plea deal, Bentley had to resign from office within one hour of his guilty plea. He also agreed not to seek or serve in any public office.

"I have decided it is time for me to step down as governor," Bentley said. "I've not always made the right choices. I've not always said the right things. Though I have sometimes failed, I've always tried to live up to the high expectations the people place on the person who holds this esteemed office."

Lt. Gov. Kay Ivey was sworn in Monday night as the 54th governor of Alabama. "Today is a dark day in Alabama, but also it's one of opportunity," she said during her swearing-in ceremony. "I ask for your help, and your patience as together we steady the ship and improve Alabama's image."

It was a stunning reversal for Bentley, dubbed the "Luv Guv" by some local media and bloggers, who said as recently as Friday that he would not step down. But Bentley faced mounting pressure to resign, as well as expanding legal troubles.

Impeachment hearings against the Republican governor got underway Monday, days after a special counsel for the state House Judiciary Committee submitted a lengthy document alleging, among other things, that Bentley used state law enforcement officers to intimidate staffers and suppress news of his affair with former political adviser Rebekah Caldwell Mason.

Bentley was desperate to keep news of the affair from spreading beyond the Governor's Mansion, where it was apparently common knowledge among staffers, the report said. It paints a portrait of a dysfunctional executive branch plagued by the affair of a Nixonian governor whose "loyalty shifted from the State of Alabama to himself."