Alberto to bring a heavy rain and tornado threat

NOW: Alberto to bring a heavy rain and tornado threat 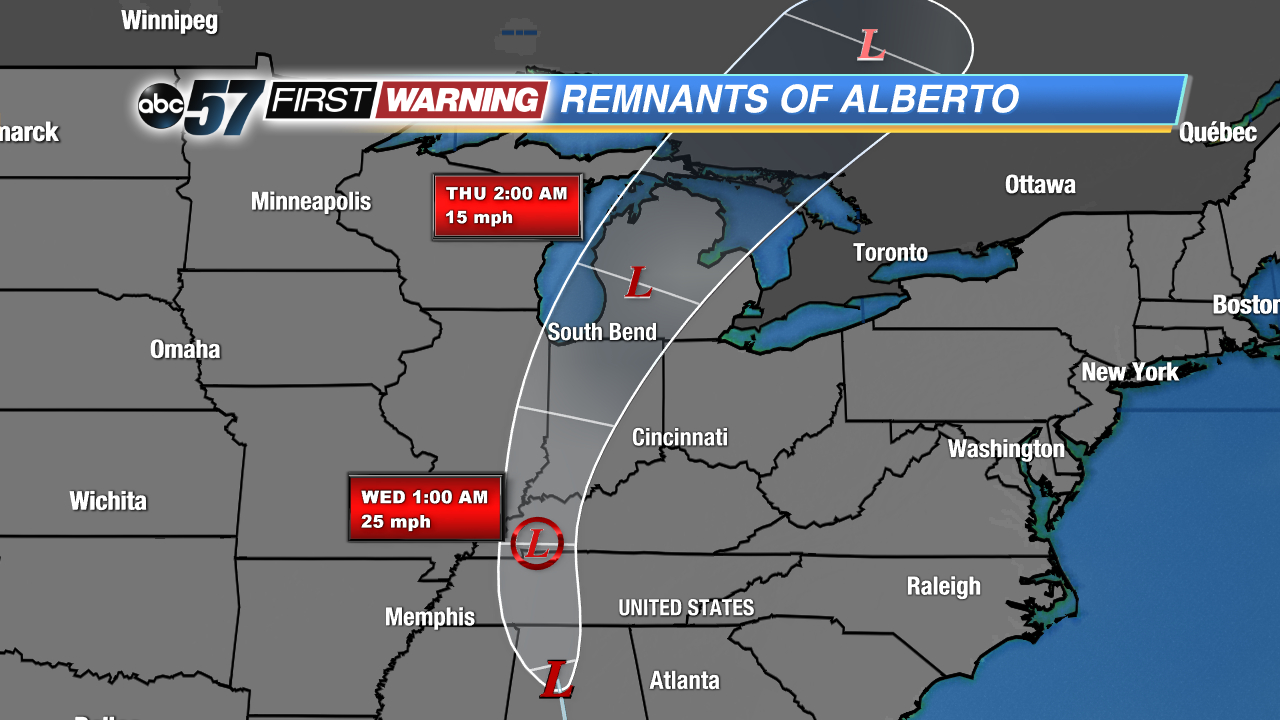 It's not every day a tropical system moves through Indiana, but that will be the case on Wednesday. The center of what was once Subtropical Storm Alberto will move directly over the heart of Michiana late Wednesday, bringing a tropical air mass to the region. Dew points will likely rise into the lower 70s, The result will be the potential for several hours of moderate to heavy rainfall. Not only that, but there is a minor severe weather threat associated with Alberto. The main hazards will be isolated strong wind gusts and a few weak and brief tornadoes. 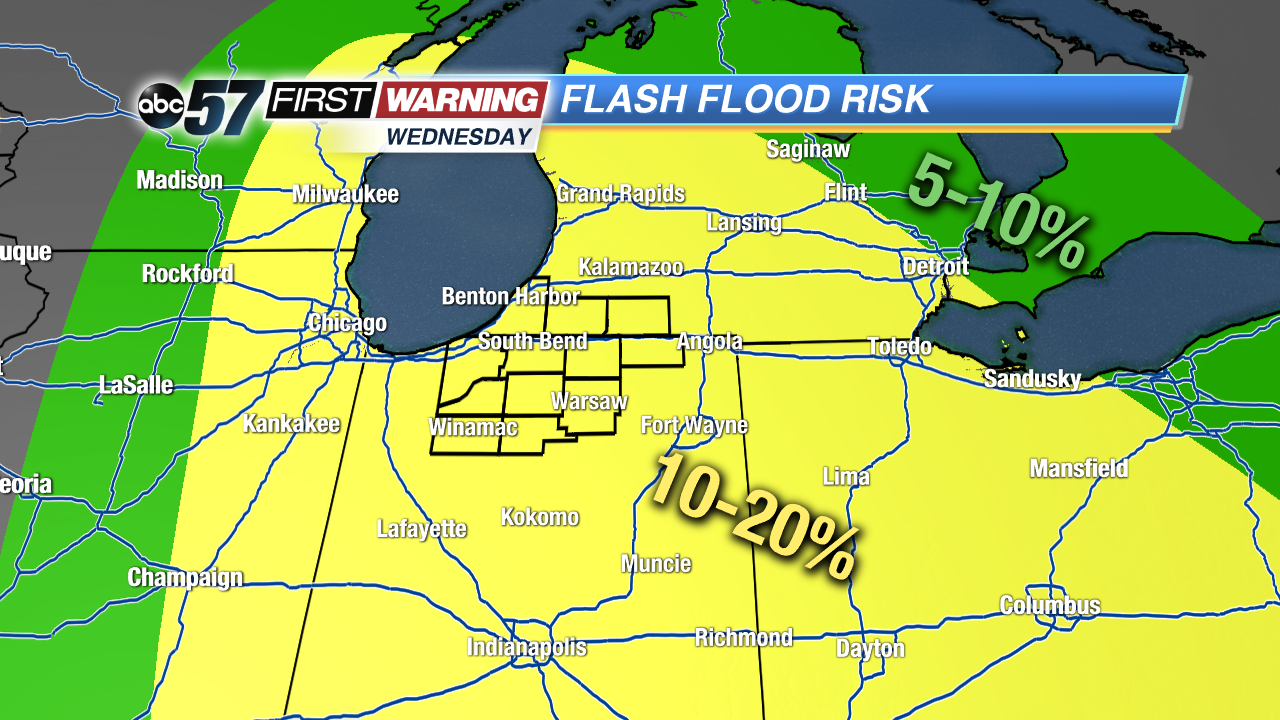 Risk of rainfall exceeding flash flood guidance within 25 miles of a point to the right of a line. Weather Prediction Center
According to the Weather Prediction Center, nearly all of Indiana and much of Lower Michigan has a 10-20% chance of seeing enough rainfall to reach flash flood criteria. In other words, the potential exists for heavy rain and some instances of flash flooding Wednesday afternoon and evening across all of Michiana. Not everyone will see extreme rain totals, but where the heaviest rain does fall, totals could easily exceed 1", thus posing a minor flash flood risk. There will also be some thunderstorms and locally heavier downpours embedded within the rain. Whoever sees a thunderstorm or two will have an enhanced risk of heavier rainfall. 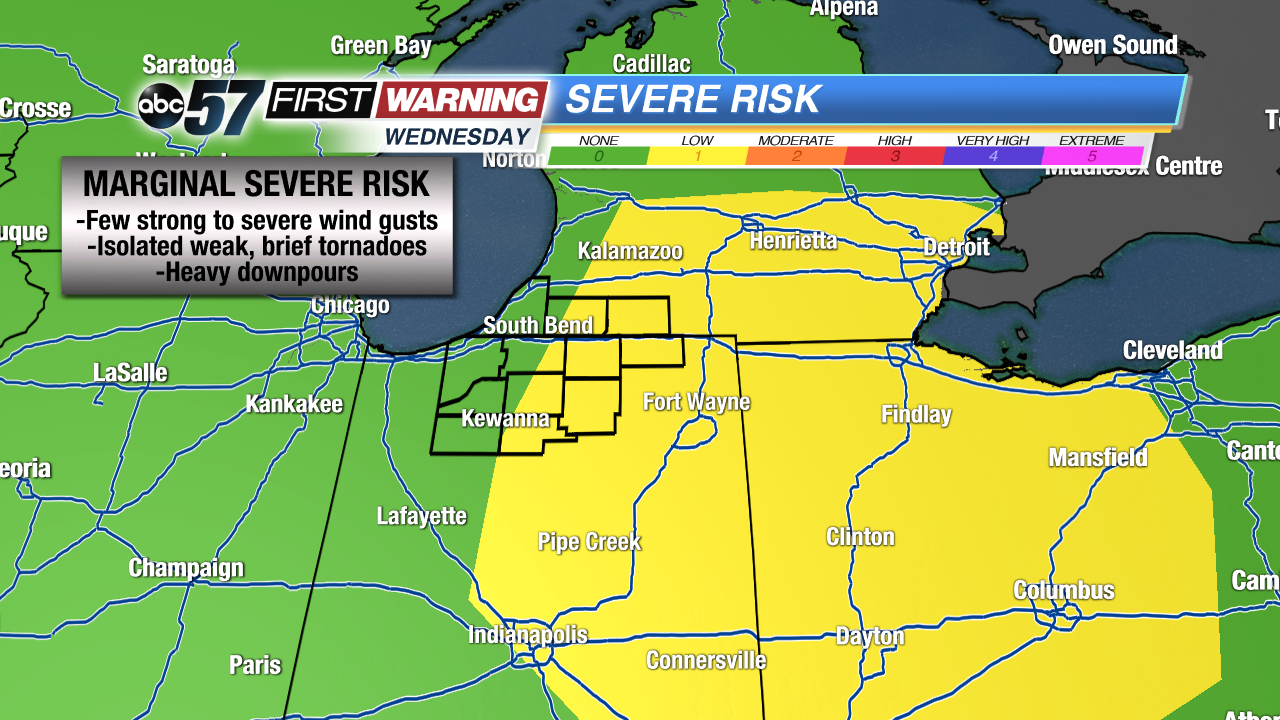 Severe risk for Wednesday. Storm Prediction Center
The good news regarding the heavy rain threat is that Alberto's circulation will move through quickly. The result will be a limited duration of heavy rain. If the system was moving slower, the risk of flooding and intense rain totals would be much higher. The other side of the storm is the severe weather side. While the overall risk is quite low, the Storm Prediction Center cannot rule out a few weak tornadoes or damaging wind gusts across the eastern half of Indiana into southern Michigan and much of Ohio. Areas with the highest chance of seeing a tornado or stronger wind gust include:

All rain and storms associated with Alberto's remnants will depart Wednesday night. There will still be a chance of some rain and storms into Thursday as another system from the west moves across the Tennessee and Ohio Valleys.