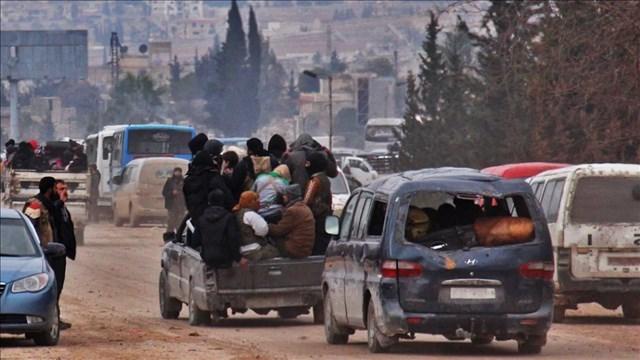 (CNN) -- The evacuation of thousands of refugees from the besieged city of Aleppo has stopped and the status of the operation thrown into doubt, the International Committee of the Red Cross said Friday.

"The evacuations have been halted," Middle East spokesman for the ICRC, Ralph El Hage, told CNN.

"We are hoping the parties reach an agreement so we can move forward with the evacuation."

Syria's state news agency reported that the al Nusra Front had blocked the exit of 1,250 civilians in Aleppo.

SANA said the evacuation stopped because there was a breakdown in the ceasefire when some of the evacuees were transporting weapons and advanced communication devices.

Evacuations won't begin again until government forces receive guarantees that "the terrorist groups" will abide by all the provisions of the agreement, reported SANA, citing "special sources."

The Syrian Observatory for Human Rights offered a different view, saying militant rebels breached the ceasefire to protest delays in evacuating hundreds of people from two Shia enclaves, Al-Foua and Kefreia, in rebel-held Idlib province to the west of Aleppo. The SOHR cited sources inside Al-Foua.

'Aleppo is now a synonym for hell'

The United Nations' Jan Egeland expressed his frustration, tweeting: "Very successful evacuations from East Aleppo have been discontinued. Thousands of civilians, including orphans, are still waiting to escape."

The World Health Organization called for medical evacuations to be resumed as quickly as possible. Almost 200 patients were transferred to hospitals in western rural Aleppo, Idlib and Turkey before evacuations ended Friday, the WHO said.

"The medical evacuation has only been underway for 24 hours, and there are still large numbers of women, infants and children under 5 amongst those who need medical care," said WHO Syria Representative Elizabeth Hoff in Aleppo. "They had to leave the collection area and return to their houses. We hope that the evacuation will resume promptly."

The Syrian regime is on the brink of retaking the whole city of Aleppo, which has been partly held by rebels for more than four years.

UN Secretary-General Ban Ki-moon called for the evacuations to resume.

"The carnage in Syria remains a gaping hole in the global conscience," he told reporters. "Aleppo is now a synonym for hell."

'A warplane is in the sky'

Activist Mahmoud Raslan, who is inside Aleppo, told CNN that he was close to the entrance gate from rebel-held to regime-held areas when violence flared.

"The evacuation was suspended by the regime and the Syrian regime now is shooting at the entrance point using heavy machine guns," he said.

"A warplane is in the sky now and the Syrian regime is trying to advance in al-Sendyanah bridge. People are gathered in huge numbers and very scared."

The activist Aleppo Media Center blamed the suspension of the evacuations on Iranian militias, who they say targeted the road leading into east Aleppo's Sukkari district with heavy gunfire.

Mahmoud Zaza, a medic in eastern Aleppo, said the need for assistance is critical.

"There are only three doctors left, including me," he told CNN.

"We have 30 cases which need immediate evacuation."

The medical evacuation is being managed with the WHO field presence in Gaziantep, Turkey, WHO said in a statement. Eight hospitals in western rural Aleppo, Idlib and Turkey, are treating the medical evacuees, most suffering trauma injuries, WHO said.

'They have displaced us from our land'

As many as 9,000 people have already been taken out of the besieged city in nine convoys since Thursday.

According to UN officials, there were 194 hospital patients among the evacuees.

For many of those leaving, their destination will be the rebel-controlled Syrian province of Idlib -- which will likely be the next target of Syrian President Bashar al-Assad's regime.

An activist working inside the city broke down while talking to CNN reporters Friday, saying he wasn't sure if his children would ever return to Aleppo.

"We waited for the international community and the United Nations to punish the criminal and not the victims (the people). Unfortunately the punishment was for the people. They have displaced us from our land," he said.

"Honestly I don't know if we can return back someday to our land or if it is going to be like the fate of the Palestinians."

Pro-rebel activist Lina Shamy uploaded video on Twitter from east Aleppo, claiming that many civilians had been unable to leave the city.

She also said many had been injured.

Thursday, Assad celebrated the "liberation" of Aleppo, congratulating the Syrian people and saying, "History is being written by every Syrian citizen."

The statement was released on the presidential office's YouTube channel.

US Secretary of State John Kerry described what had already occurred in Aleppo as "unconscionable," adding all sides had to work together on a ceasefire.

"There remains tens of thousands of lives that are now concentrated into a very small area of Aleppo, and the last thing anybody wants to see -- and the world will be watching -- is that that small area turns into another Srebrenica," he said, referring to the massacre of nearly 8,000 Muslim men and boys in 1995 during the Bosnian War.

Turkish President Recep Tayyip Erdogan said there were a lot of people left in eastern Aleppo. "I hope the (evacuation) process will not be interrupted," he said, according to Turkish state news agency Anadolu.

If the regime does take control of the key city, it would mark a turning point in the brutal five-year civil war that has killed hundreds of thousands of people. The development would put the regime back in charge of all five major cities in Syria, making a political opposition far less likely.