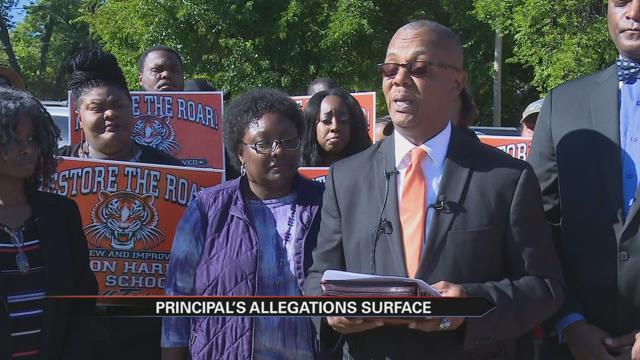 In June, the school district placed Rodger Tripplett on paid leave, the reason was never disclosed.

Friday, four months later, some community leaders and parents are standing by him after allegations came to light.

“I choose to be free to speak the truth, and in doing so, represent the essence of what it means to be a Benton Harbor tiger,” said Tripplett.

The ex-principal of the school says he's now fighting to restore his name.

“Our community and those of us who love and support it deserve to hear and understand the steps taken in this calculated assignation attempt on my personal and professional reputation,” he said.

He's speaking out after allegations of official misconduct and child abuse surfaced Friday morning in the Herald Palladium.

According to that paper, the superintendent Dr. Shelly Mills-Walker initiated an internal investigation into Tripplett after getting complaints from a parents and district staff.

The findings apparently itemized in a 17-page report.

The Herald Palladium reports , inside that document, a variety of accusations are leveled against Tripplett.

Including, claims he received a video of a 12 or 13-year-old student engaging in a sex act.

The report also states the ex-principal discriminated against some personnel because of their age or race.

Friday, the district's board of education was set to hold a special meeting regarding to his employment status.

That meeting was postponed per Tripplett's request.

Superintendent Walker could not specifically address the situation but said the board will continue toward a resolution.

“The district will respond appropriately at a special board meeting which will be rescheduled within the next week,” said Walker.

Tripplett stood with a sea of supporters, including mayor Marcus Muhammad, all calling the accusations against him unfounded.

"They didn't give him a chance to really defend himself before they threw out the allegations of him watching the video, or him graduating students that weren't supposed to, I think that's all crap,” said parent Tamika Madden.

Berrien County’s prosecutor said there were no formal charges brought against Tripplett.

A sergeant with Michigan State Police did confirm a report of child pornography had been filed in July against him, but says nothing came of that.

She weighed in on the investigation against her brother in a statement sent to ABC 57 News:

"I know beyond a shadow of doubt the allegations are spirited from unreliable sources in an attempt to demonize the character of Mr. Tripplett.  However, this is about more than what it appears to be on the surface. Benton Harbor's residents,  students and staff especially those of African American descent are being targeted in ways currently unknown.  As much as it appears that the Board of Education has autonomy pertaining to this matter, I can assure you this witch hunt is mandated from authorities outside of the Benton Harbor area.  It saddens me that allegedly our board president along with the superintendent and the executive director of human resources for Berrien Resa conspired to attempt to destroy such a dedicated member of our community.  I will remain hopeful throughout this predatory process until the day of truth reveals the phantom agents operating from their high towers, while orchestrating the land grab of our beloved BHHS."