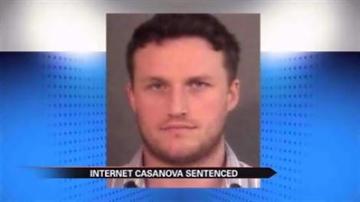 ST. JOSEPH, Ind. -- The man who has been called the Internet Casanova was sentenced on theft charges in a St. Joseph County court Wednesday.

Raymond Holycross pleaded guilty in April to stealing a camera from Theresa Bridegroom, then pawning it.

Holycross is accused of stealing the hearts and then the belongings of women in several states.

"I am happy that he got the full amount for what we discussed, like I said I wish it would have been more, but at least he got all of what he could have gotten,” said Bridegroom.

He was sentenced to the maximum – 18 months. He was also ordered to pay $856 in restitution to Bridegroom.

"He didn't think of anyone but himself, actually when he did take that camera I do remember the next day he came home with a new video game for my son,” said Bridegroom.

Her son wrote a letter to the court. The judge read it and took it into consideration before he announced the sentence.

"I could see Ray reading, sitting there, which gave me satisfaction. I was looking at him and I could see him flipping through the pages,” said Bridegroom.

Bridegroom wrote the judge a six page letter detailing how her life has been turned upside down by the Holycross’ lies.

Judge John M. Marnocha said the felony D theft charge is just a routine theft case, but in this case he said, "it's not just a simple theft, you are in essence a con man, you used what ever you could to get into Theresa Bridegroom's heart and you did it all for profit.."

Marnocha also said he was quite disturbed by all the media attention this case has been given. He said he googled Ray Holycross this morning before court and saw 48 pages of information including the name he has been given on line the internet Casanova. Holycross chuckled at the phrase.

Holycross is accused of stealing from women in at least seven different states. He allegedly lied to them about who he was and conned them into paying his room and board.

Holycross will now face theft charges in Howard County, Indiana. He is accused of stealing a handgun and another expensive item from a woman who lives near Kokomo.

He also faces charges out of the state of Oregon as well.