Alleged supermarket shooter had complicated past 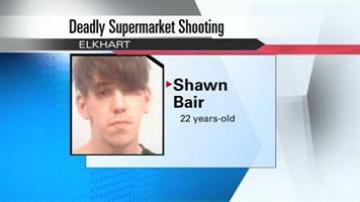 ELKHART, Ind. -- Shawn Bair allegedly went into Martin's on Wednesday in Elkhart and shot two women before police killed him. The 22-year-old had a complicated past.

Bair's aunt spoke to ABC57 Friday. She says the family is terrified because they've been receiving threats.

She says police found a goodbye note in Bair's pocket that night.

To find out more about Bair, we looked at his court records. In 2010 he wrote that he lived in a house on CR15 with his mom and stepdad. We went there, but no one was home.

According to the court records, Bair was arrested four times in about a year and a half.

He wasn't sent to jail every time.

In 2010, Bair made a deal to do time at Oaklawn, a mental health facility, instead of going back to jail.

In a letter to the judge, Bair begs for mercy and a second chance. He said he didn't' want to go to jail and that he had been working hard on bettering himself.