AM General layoffs affecting other businesses 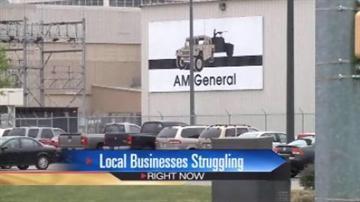 MISHAWAKA, Ind. -- The past few years have been tough on AM General and its employees. Orders decreased and employees were laid off. Nearby businesses are starting to feel the pinch.

Robert Chudzicki used to work at AM General. He was laid off in January from what he says is the best job he ever had.

"It's hard work, but the pay's good, the benefits are good, and you're doing something that's important for the troops,” said Chudzicki.

After a hard day at work, The Hideout became one of his favorite places to hang out.

"I didn't even know this bar was here until I worked there and somebody brought me over for a beer after work. And I've lived in Mishawaka my whole life, since I was three years old,” said Chudzicki.

But business has slowed down recently.

Chudzicki is still drawing unemployment, but was driving himself crazy waiting to be called back to work.

So he's helping the bar by volunteering his time.

"They lost somebody and I just wanted something to do to get off the couch,” said Chudzicki.

He says seeing the bar empty every afternoon is depressing.

"I wish everything was still going good; booming, everybody does; I don't think there is anybody that's happy when things slow down,” said Chudzicki.

We asked if he thought the sequester and cuts in defense spending had anything to do with the decrease in orders at the plant.

He said he wasn’t sure.

"If that's what it is, I hope they get things settled. I hope they figure something out and getting it moving, because these are good jobs for our community here, and we need jobs. Everyone needs a good job,” said Chudzicki.

Chudzicki hasn't heard if or when the plant will be recalling the hundreds of laid off workers, but he's getting antsy and says he may have to start looking for another job soon.