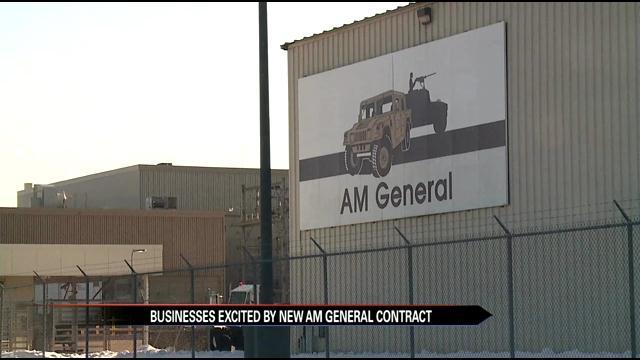 AM General is going to be manufacturing the Mercedes-Benz R-Class luxury vehicle at the Mishawaka plant, according to an announcement by the company Tuesday.

Production is moving from a Tuscaloosa, Alabama plant to Mishawaka.

The company anticipates hiring new employees but wouldn't say when hiring would begin.

Larry Wolfe's restaurant, The Blue Lantern, is about a mile from the AM General plant. He is excited to hear the company will be hiring new employees.

Over the years, Wolfe says AM General Workers were his best customers every day for lunch, but then things started to change.

“They moved the corporate office downtown so we lost business there, so now we don't open up until 2:30,” said Wolfe.

Fewer and fewer people started coming in. So he scratched lunch all together.

With Tuesday's announcement, he says that could mean lunch at The Blue Lantern might return.

“It would be great for us to be able to open up for lunch again,” said Wolfe.

Wolfe says he'd love to serve a hot lunch to their workers.

AM General says production of the Mercedes Benz R-Class should start sometime this summer.

Local leaders released the following statements after the announcement:

South Bend Mayor Pete Buttigieg
Once again, the South Bend area is competing and winning when it comes to manufacturing job growth. With its South Bend headquarters and Mishawaka facilities, AM General is continuing to create good-paying jobs for people across this area. Working families are the real winners here, with hundreds of new jobs coming online and our area primed for further innovation and growth. It's a good day for South Bend, Mishawaka, and the surrounding region.

Representative Jackie Walorski
Today's announcement that Mercedes-Benz has chosen AM General to produce their vehicles is another great example of the excellent manufacturing provided by AM General that's able to meet the increasing demands of businesses looking to expand. This is great news for the workforce of South Bend and Mishawaka.