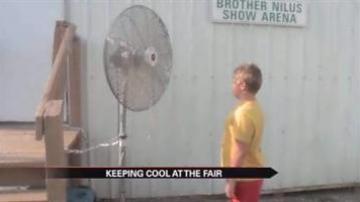 SOUTH BEND, Ind. -- Ambulances were called to the St. Joseph County Fair Monday night to help a young girl who passed out because of the heat.  An off-duty firefighter jumped into action keeping her cool before help arrived.  She was taken to Memorial Hospital and is expected to be okay.

Fairgoer Jackie Nemeth says she isn't surprised at all surprised that the girl got sick out in the brutal heat.

Nemeth said that girl wasn't the only one falling sick in this scorcher.

"No, we have some horses that are sick as well," said Nemeth.

Slavinskas says he is glad the girl is okay, but he said situations like these can easily be prevented.

"We have a couple of fans with misters on them that are helping out a little bit," said Slavinskas.

Not everyone said they were using cooling stations when asked.

"I did not know there was one," said Nemeth.

There is even an air-conditioned commercial building to beat the heat.  Some people have been passing it up, but Nemeth said she is finding any excuse she can to get out of the sun.

Slavinskas said his EMT's are ready to help, but that families coming out should be an advocate for their own safety from this excessive heat.

"Coming out in this heat, make sure you have a lot of liquids.  Drink a lot of water..light clothing..loose clothing and just take it easy don't try to do too much," said Slavinskas.

Nemeth said her next stop at the fair will involve a fan and a mister.

"I need to find one," said Nemeth.