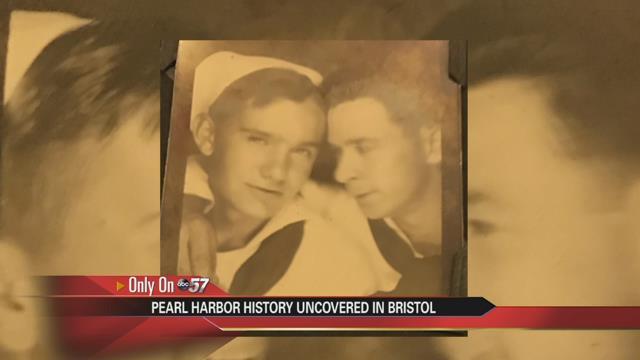 It’s been 75 years since thousands of men and women lost their lives in the attacks on Pearl Harbor.

One of those men killed that day, 22-year-old Bristol native Charles Harker, who died fighting for his country.

Harker’s life, until Wednesday, was mostly remembered by the American Legion in Bristol.

The American Legion in his hometown honored his namesake shortly after World War II ended.

Little was known about Harker or his family until Wednesday.

Hiding in a cabinet in the American Legion office for over a quarter century were two scrapbooks on the life and death of Harker.

Pete Owens, a past commander at the Post, decided to donate the books.

The scrapbooks contain pictures and letters of the 22-year-old.

Even the Navy’s original letter that was sent home after Harker went missing on December 7th aboard the U.S.S. Nevada.

Patrick McGuire is the Curator of Education at the Elkhart County Historical Museum.

“The strongest thing for us, is that it builds those connections. We want to build connections with the past,” said McGuire.

The historical museum that now houses this Bristol hero’s memory was also his high school.

Walter Repaich is the current Commander of American Legion Post 143.

The museum will now look through the collection, research it and then hopefully soon have it on display for years to come.