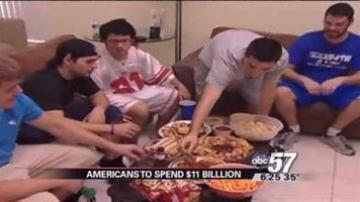 We're just a few days away now from Super Bowl XLVI and Americans are on track to spend more than ever on the big game.

The National Retail Federation estimates that football fans will shell out a record $11 billion this year.

173 million people are expected to watch the Giants take on the Patriots in Indianapolis.

The average fan spends more than $60 on Super Bowl merchandise and all of those snacks.