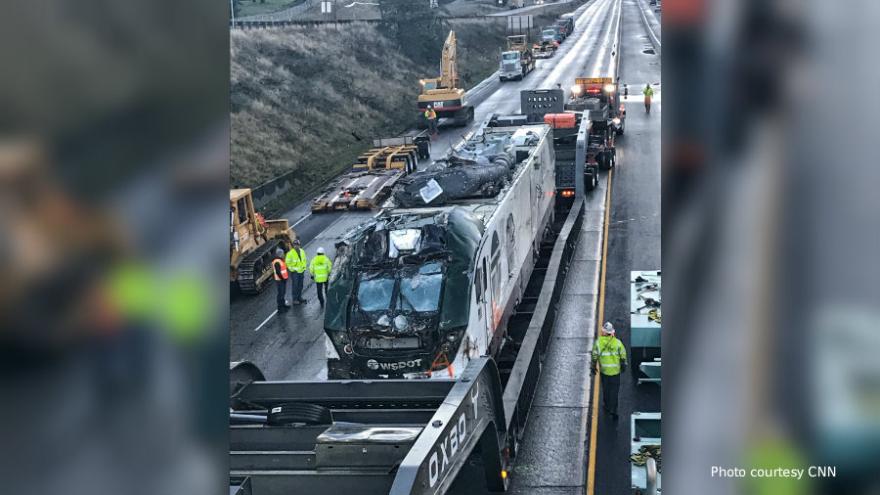 (CNN) -- Amtrak's president says the company is "profoundly sorry" after a train derailed this week in Washington state and hurtled off an overpass onto a freeway, killing three people.

"We share everyone's sense of urgency to identify exactly what caused this to happen, and we continue to fully cooperate with the investigation being led by the NTSB," Richard Anderson said in a statement.

All the crew members are hospitalized, and the National Transportation Safety Board is setting up interviews with them to get more details on Monday's crash of Amtrak Cascades 501 near DuPont, Washington. The train was on its inaugural journey from Seattle to Portland, Oregon.

So far, there are many questions but few answers. It's unclear why the train was traveling 80 mph in a 30-mph zone, NTSB member Bella Dinh-Zarr said.

Adding to the mystery, positive train control, the technology that can automatically slow down a speeding train, wasn't activated.

"The locomotive was in the process of getting a system of PTC installed, but it was not yet functional," Dinh-Zarr said. Instead, that segment of tracks had centralized traffic control, she said, which can't enforce speed restrictions on a train like PTC.

Victims' families and officials struggled to understand how the tragedy happened.

"There are a thousand unanswered questions about this right now," Washington Gov. Jay Inslee said. "One of the questions is, could that speed control have made a difference? We don't know that for sure at the moment either."

The injured included Timmy Brodigen, 16, who had planned to spend time with family before Christmas, CNN affiliate KATU reported.

He has had multiple surgeries and procedures after suffering compressed vertebrae and bleeding in the brain.

"Timmy is hooked up to every machine known to man that you can imagine," a cousin, Tab McFadden, told the TV station, adding that his family has set up a GoFundMe page to help with medical costs.

"It just crushes you, it breaks your heart to see this," he said.

On Wednesday, the Pierce County medical examiner's office identified Benjamin Gran, 40, from Auburn, Washington, as one of the three men killed.

The two other victims were Jim Hamre, 61, and Zack Willhoite, 35, the Rail Passengers Association said. Hamre and Willhoite wanted to experience the first trip on the new service route.

The two friends traveled to ride trains together, CNN affiliate KIRO reported. They were also members of All Aboard Washington, a rail advocacy group in their home state.

'We have to assure people's confidence in rail transit'

Investigators will likely examine the track, human performance, operations and mechanics of the train. The track in Washington state had undergone millions of dollars of improvements and weeks of testing.

The questions investigators will be asking after Amtrak derailment

"We have to assure people's confidence in rail transit," Inslee said. "It's very difficult to understand, but rail transit is still the safest method of transit today. But that's not good enough for us. We want zero accidents and zero tragedies of this nature."

The NTSB has recommended the use of PTC for decades. Railroad companies have until the end of 2018 and a possible extension to 2020 to implement the costly system.

Amtrak's Anderson told reporters Tuesday: "It's not clear yet from the NTSB whether PTC would have prevented the accident or not. We really must wait for the NTSB to give us that information."