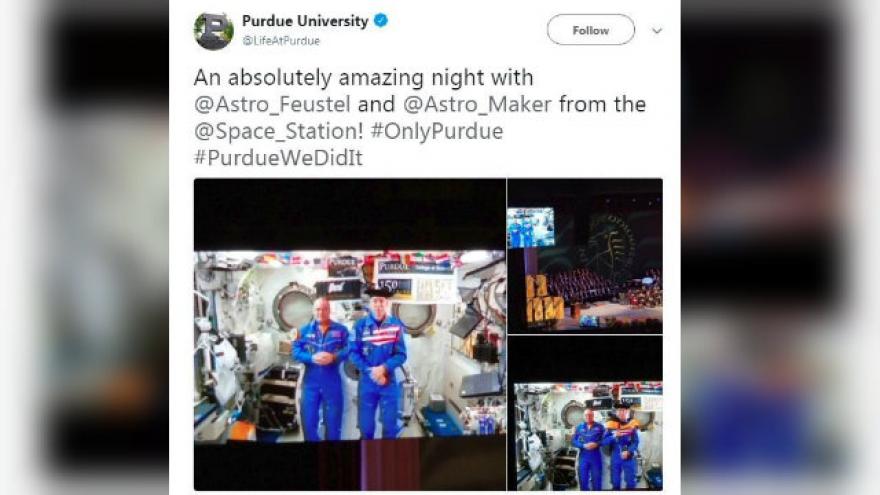 Andrew Feustel, who\'s on the ISS as part of Expedition 55/56, was beamed into the commencement program via live video so other graduates could watch the zero-gravity hooding ceremony, according to the Indiana university. Photo courtesy Purdue University/Twitter

(CNN) -- NASA astronaut Andrew Feustel is over the moon after he received an honorary doctoral degree Friday from Purdue University -- and he didn't even have to leave the International Space Station.

Feustel, who's on the ISS as part of Expedition 55/56, was beamed into the commencement program via live video so other graduates could watch the zero-gravity hooding ceremony, according to the Indiana university.

An academic dean usually places the hood on a recipient of an honorary degree, Purdue said in a news release. In this case, Scott Tingle, another astronaut aboard the space station and a Purdue alumnus, placed the hood on Feustel's shoulders -- for reasons we can all understand.

Feustel called his doctor of science degree "a rare privilege" and said the school had "played and important, integral part in my life and my successes."

"For me, after community college, there was no other choice but Purdue -- the only university I applied to, hoping and now knowing that that decision would change my life and set me on a path to the stars," he said Friday.

Purdue noted that 24 astronauts have graduated from the school, as well as hundreds of other NASA employees and space industry professionals. Neil Armstrong, the first man to walk on the moon, was a Purdue graduate.

Feustel earned a bachelor's degree in solid earth sciences from Purdue in 1989 and a master's degree in geophysics from the school two years later, Purdue said in a news release.

Feustel on Friday also addressed his fellow graduates, encouraging them and wishing them luck in their endeavors.

"You have earned your right to walk the stage," he said, "and I wish you all the chance to fly among the stars, professionally, and for some of you, personally."