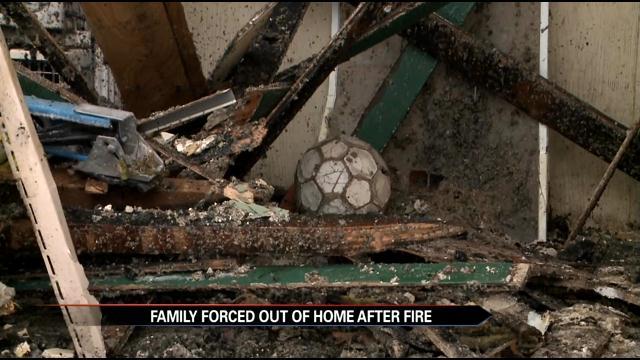 Imagine having to be forced out of your house in the middle of the night to face below freezing temperatures. This was a reality for one Elkhart family early Tuesday morning.

Erick Lewis and his girlfriend, Candace Love, along with her four children live at 925 West Cleveland Avenue. They had no choice but to seek shelter in below freezing temperatures.

“The weather was cold. I think we had negative eight degrees. It was gusty, it was snowing," said Kent Stouder, Elkhart Fire Department Division Chief.

Chief Stouder says the department received a call a little past midnight. After rushing to the scene, crews found the homeowner along with his girlfriend and four children outside in the cold.

Stouder says, “The home owner called and stated that his wood burner had caught the house on fire. Once we got there, there was heavy smoke and fire in the house flames coming through the roof.”

Stouder says there was extensive damage from the ceiling on the first floor, all the way up to the attic.

He also adds that construction of the home made it difficult to put out the fire. It took the department about an hour to extinguish the flames and with tight crawl spaces in the home there were a lot of hot spots causing significant damage.

“It may possibly be a total loss on the house but we are just lucky that nobody was hurt. We had four children and two adults in there. I did not see any working smoke detectors when I was in there so I think we averted a big tragedy,” says Stouder

The family was lucky that Lewis smelled the smoke and got them out.

The Red Cross responded with blankets and assistance.

Ben Jeffery,  Red Cross Elkhart Volunteer Coordinator says, “We supplied them with food assistance clothing assistance, assistance with seasonal garments, shoes, three nights in a hotel, and if they find housing then we will supply bedding.”
Share this article: