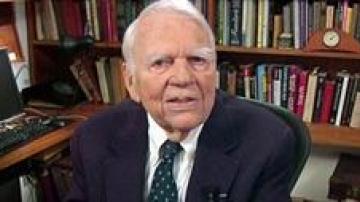 Andy Rooney, the rumpled writer whose weekly riffs about the absurdities of everyday life made him one of television's longest-running commentators, died Friday night, just weeks after his farewell broadcast on "60 Minutes." He was 92.

He died from complications following a minor surgery, according to a news release from CBS News.

"It's a sad day for journalism and the legions who adored and admired Andy Rooney's candor, wit and perspective. Our thoughts are with Brian, Emily and the entire Rooney family," said ABC News President Ben Sherwood in a statement today.

Rooney presented his first commentary on "60 Minutes" in 1978 and he became a weekly fixture the following year when he assumed his perch at the end of the broadcast.

It would be a remarkable run. By the end of Rooney's final appearance Sunday, Oct. 2, he had presented 1,097 original essays and had worked for CBS for 62 years.

"One day about 10 years ago the door to my office opened and who walked in but Bill Gates. … Seemed like a nice guy and has done more with his money than most billionaires. But that's as far as I want to go being

"I had one typewriter for 50 years, but I have bought seven computers in six years. I suppose that's why Bill Gates is rich, and Underwood is out of business."

In a 2008 commentary, Rooney marveled at the flood of Christmas catalogues stuffing his mailbox. "This is a Sears catalogue. Sears, whatever happened to Roebuck? You never hear Sears, Roebuck anymore. Call if you're out there, Roebuck," he deadpanned.

In one of his final appearances, Rooney kvetched about changes in pop music. "If I am so 'average American,' how come that I have never heard of most of the musical groups that millions of others Americans apparently are listening to," he said.

"The singers I know have been replaced by singers like Justin Bieber, Lady Gaga and Usher. I mean, who?

Andrew Aitken "Andy" Rooney was born in Albany, N.Y. in 1919. In 1941, while attending Colgate University, he was drafted into the Army, leading to one of Rooney's formative experiences, covering World War II for the "Stars and Stripes" newspaper, what he called "the single luckiest thing that ever happened to me."

While in London, he met two men who would go on to iconic success at CBS, Walter Cronkite and Don Hewitt. Rooney followed them to CBS in 1949 as a writer for "Arthur Godfrey's Talent Scouts" and then "The Garry Moore Show." He also began writing for CBS News, for such programs as "The Twentieth Century" and "The Morning Show with Will Rogers, Jr."

In 1962, Rooney began a long collaboration with the correspondent Harry Reasoner, writing and producing a series of Reasoner's CBS News specials.

Rooney won the first of his four Emmy Awards in 1968, for writing an installment of the CBS News series, "Of Black America." That same year, he also joined the staff of a new program helmed by his old friend Hewitt: "60 Minutes."

At first, Rooney worked as a producer on the broadcast with no thought, he would later claim, of appearing on the air himself. But in that initial season, he appeared in silhouette with a "60 Minutes" senior producer for an end-of-the broadcast segment called "Ipso and Facto."

"It was one of many experiments … Hewitt tried as an end for the program," according to Rooney's official CBS News biography.