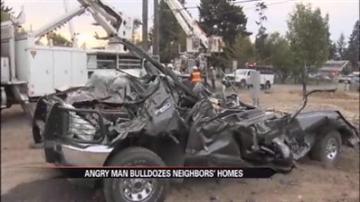 WASHINGTON STATE -- One man in Washington State became so angry with his neighbors he decided to rent a bulldozer.

It may look like a tornado went through this neighborhood but it was actually the neighbor bulldozing four homes.

He cut power to thousands of people and took out everything in his path.

His rampage landed him in jail.

The woman says she does not know what started the man's anger but this is not the first time neighborhood bickering has led to conflict.

The man has left deer carcasses on his neighbors' driveway and burned tires in his backyard.