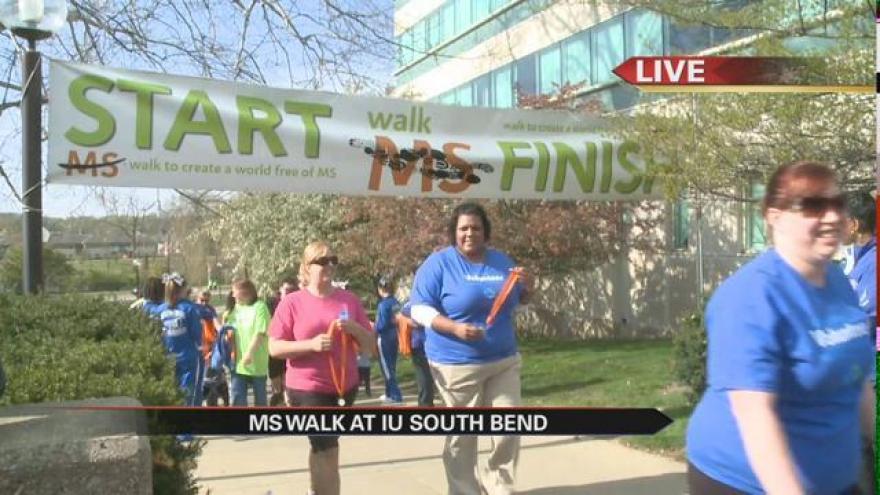 The annual Walk MS: Michiana to support the National Multiple Sclerosis Society was held on Saturday.

It can disable the central nervous system. It does so by interrupting the flow of information within the brain, and between the brain and the body.

Karen Brandy-Comer has had MS for more than three decades and said she never knows what to expect each day.

"It's like waking up everyday and you don't know what it's going to be like. I've been diagnosed for 34 years and I started coming down with it when I was 18 and it took them five years to find out what it was," said Brandy-Comer.

She recalled the condition gradually getting worse until the point it put her in a wheelchair. That is part of the varying symptoms associated with MS, ranging from numbness and tingling to blindness and paralysis.

"Around your nerves is a Myelin Sheath. MS eats away at that sheath until the nerve is totally exposed, then when my brain tells my legs to walk, the message gets lost in my body,” she added.


The annual event was to raise money to support research and programs for the 8,000 Hoosiers living across the state with MS, according to the National Multiple Sclerosis Society.

There was no cost to participate but teams were encouraged to raise money in support of the organization's mission.

"I think our community is starting to rally around it more and more as the years go by," said Jennifer Liddell, Development Coordinator with the National MS Society of North Central and Northwestern Indiana.

She said last year they raised a little over $85,000 and this year they hope to raise at least $90,000. Last years event included more than 1,000 participants and she hopes the same for this year.

“MS is one of those silent diseases that not many people have known about for very many years. It's becoming more obvious the more the word gets out. The more people hear that they know someone who has a family member or a coworker with MS, said Liddell."

For her, she has a personal connection. Her mother,Brandy-Comer, was diagnosed when she was very young.

"My mother has MS. She was diagnosed when I was one years old and it's been a personal mission for me to find a cure for MS and now I'm making it a professional mission as well," Liddell added.

Although, MS can stop people from walking, the society is at work to make sure that does not happen by providing support for more research and professional education programs.


There are support groups locally to help those suffering with this disease.

The second Tuesday of each month (except January and February) at 10 a.m. there is a support group that meets in the Martin's Super Market (South Bend Ave.) Deli area.

There is another support group that meets the second Wednesday of each month (except December-March) from 4:30-6:30 p.m. at the Western Branch of the St. Joseph County Library.

For more information on MS and how you can get involved, click here.