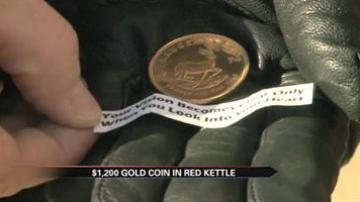 MISHAWAKA, Ind. -- The Salvation Army says an anonymous donor dropped a 1974 South African Krugerrand wrapped in a $100 bill into a kettle in front of the Sam's Club in Mishawaka.

The Salvation Army says the coin, worth more than $1,200 was dropped into the kettle on December 6th.

Also with the coin was a typed message that read, "Your vision becomes clear only when you look into your heart."

The Salvation Army says they got a gold coin at the same kettle two years ago with a similar typed message.

Two days before the coin was dropped, the Salvation Army sent out a release saying they were only at 51.5-percent of their goal.

"A gold coin certainly raises our spirits and gives us hope that we will make our goal this year, despite all odds," said Major Bob Webster, Senior Kroc Officer.