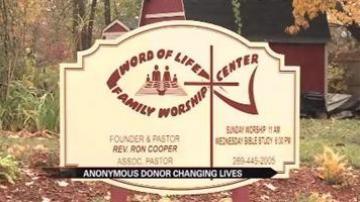 CASS COUNTY, Mich. -- Anonymous donors have been stepping forward and helping out in Cassopolis. One donor stepped forward paid off the mortgage of a church and another is helping hundreds of students afford lunch.

Two anonymous donors are inspiring a chain reaction of generosity in Cassopolis. One community member donated thousands to pay off the word of life family worship center's mortgage.

Reverend Ron Cooper called up his wife minutes after.

One's now footing the bill for new carpet down the aisles and another said they would cover whatever else the church needs.

"When it actually happens Its just a moment of 'Wow look what just happened,’” said Cooper.

Most people don't have extra money lying around and that's what makes these donations so special.

"In this little area of Cassopolis you look around it just looks like the community is dying. Houses are foreclosed and businesses are closing up and then for a donation to come in and pay the church that was pretty incredible,” said Dawn Grant, Cooper’s daughter.

Only a few minutes down the road, lunch period is even better than usual.

An anonymous donor sent a check to specifically wipe out all of the negative lunch balances.

"When a student reaches a certain amount, say $9, we send a letter home saying your child is in negative status,” said Robyn Bright, Food Services Director for Cassopolis Public Schools.

But now over 100 students don't owe anything thanks to the anonymous donor. Their parents can now focus on paying off other bills.

Bright says the donors are setting a great example for the kids. And even though the money's already gone, this was a first for her.