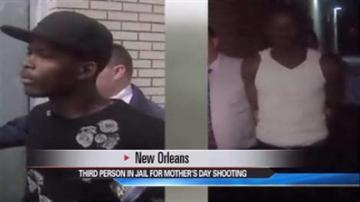 NEW ORLEANS — Another person is behind bars in the New Orleans Mother's Day parade shooting. The 19-year-old in question is accused of helping the shooting suspects.

Two brothers have been arrested in connection to the incident so far, but they say they had nothing to do with the shooting.

They're accused of firing into the crowd on opposite sides of the street.