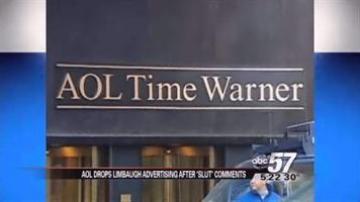 AOL Incorporated announced its pulling ads from the conservative show. They're among nearly a dozen companies, who have withdrawn sponsorship from the program.

On air, Limbaugh called Sandra Fluke some nasty names including a "prostitute."

The company Limbaugh works for posted on their Facebook site that his comments are not in line with their values.