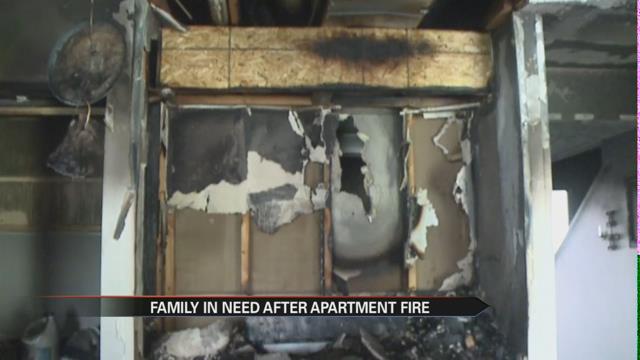 A mom and her four kids in Benton Harbor have been forced out of their home after a fire on Wednesday.

The family lives in the 800 block of Columbus Street at an apartment complex.

Tamira Jennings said they lost the majority of their property to smoke or water damage.

Jennings said, “It's bad. It's a lot of smoke damage. The downstairs is tore up. I lost a lot.”

A scorched faucet, a burnt baby's bottle, and a collapsed ceiling are all that's left on the bottom floor.

Jennings said, “A mess when you first walk in there's water, smoke, walls are all tore up, but there's nothing there.”

Jennings said she's thankful two of her children were at school and the other two with their grandma when the fire started.

Jennings said, "My neighbor called while I was at work, my neighbor said she smelled smoke and she think my apartment was on fire!”

The Fire Marshall for the Benton Harbor Department of Public Safety said their preliminary investigation revealed that the fire started in the kitchen near the stove area.

Steve Marshall said, “It was a kitchen fire, it started to get in to the walls, we chased it into the ceiling. And we were pretty lucky to get on it so fast and knock it right down.” Jennings said she could use some help from the community during this difficult time. She needs diapers and clothes for her kids.

Jennings said, “The kitchen area, the living room, the furniture, the tv, pictures on the wall,my kids toys, food… everything.”

If you can help the Jennings family during this time you can call the Golden Eagles Estates apartment complex and they will put you in touch with her family.