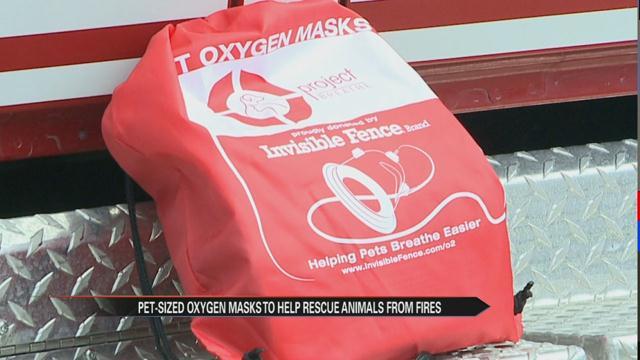 It is estimated that about 500,000 pets are affected by house fires each year, according to the National Fire Protection Association. In some cases, fire departments are not equipped the with proper gear to care for those rescued pets but that has changed for one department.

The Argos Fire Dept. added a new tool to their tool box after a recent house fire involved two kittens.

Amber and Kenny Gardy recalled the fire that happened in their apartment on April 21st.

“I had just changed out the kitty litter and we went to go get more kitty litter from Dollar General and I lit a candle and I put it in the same spot that I usually do,” said Amber Gardy.

When they came back, they found their apartment up in flames.

“We pulled up to the end of the road and I was like ‘honey I think our apartment's on fire',” said Kenny Gardy.

Alan Earl, owner of Earl-Grossman Funeral Home right next door to the Gardy's saw a puff of smoke coming from the house and called 911.

"It's kind of a testimony to our 911 system. When you make a phone call and it goes to a dispatch center it gets back there that fast. Within 15 seconds of me calling, I could hear the sirens going off in town and the fire department was here within three minutes, said Earl.

The next biggest concern for the Gardy family was their two kittens.

“Our neighbors told us they had already called 911 and I ran inside to see if I could find our cats,” said Kenny.

He said he couldn't see into the house because the smoke was so thick.

“As soon as they got him out of the apartment they wouldn't even let us hold him, they got oxygen on his face right away."

One of the kittens was in quite a bit of distress and was handled over to EMS workers once they arrived on scene.

"We put them both on oxygen for a while and they actually both came around and they're still here today because of the actions that our EMS took to keep the cats alive,” said Assistant Fire Chief Doug Middleton.

The efforts of the EMS saved both kittens; however, the mask they used was a human mask not fit for an animal.

“We had to improvise. This oxygen mask we have is for an adult. It is a re-breather mask,” said Middleton while demonstrating the mask.

After the fire, a member of the community reached out to the fire department and pursued a grant application that would allow them to be equipped with pet masks specifically designed for animals.

"These masks fit a lot better. “I'm really glad we are able to do more for the animals and provide a little more customer service,” Middleton said in regards to the new pet masks.

The masks are the Invisible Fence Brand and is known as Project Breathe. The Pet Oxygen Mask Donation Program was started to provide oxygen mask kits to first responders.

The Invisible Fence has given out more than 10,000 masks across the United States.

Any fire department is eligible for these kits through the process of filling out a grant application.

“It's amazing that they got animal masks out of this. It's really cool and it's a really big deal because no body wants to lose their pets in a fire,” said the Amber and Kenny Gardy in response to the fire department getting these masks.