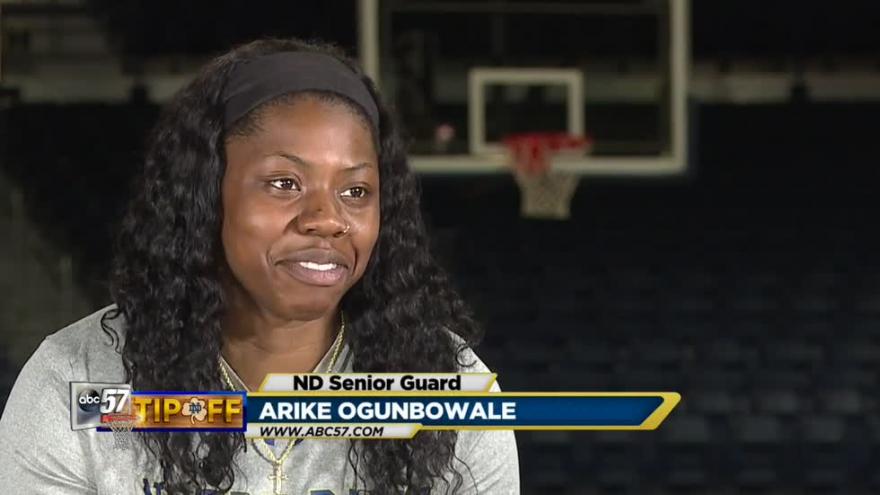 The Atlanta Tipoff Club announced Notre Dame senior guard Arike Ogunbowale is one of four finalists for the 2019 Citizen Naismith Trophy for Women's Player of the Year.

The trophy recognizes the most outstanding women's college basketball player.

The four finalists are:

"Each of the four finalists has the talent and commitment it takes to win the 2019 Women's Citizen Naismith Trophy," said Eric Oberman, executive director of the Atlanta Tipoff Club. "As the tournament begins, we look forward to watching these players lead their teams toward a championship, while they compete for the individual Women's Player of the Year honor."

Fans can vote for their favorite now through April 3 by clicking here.

The results of the online fan vote will account for five percent of the overall vote.

The winner of the 2019 Citizen Naismith Trophy for Women's Player of the Year will be announced on April 6.

Ogunbowale is one-of-five Division I players to average over 20 points, 4.5 rebounds, 2.5 assists and 1.5 steals. She leads the ACC with 20-point scoring games with 21 and has twice recorded a seven-game stretch this season of 20-plus point performances.

Ogunbowale helped guide the Irish to an ACC regular season and tournament title, along with a No. 1 seed in the NCAA Tournament in the Chicago Region.