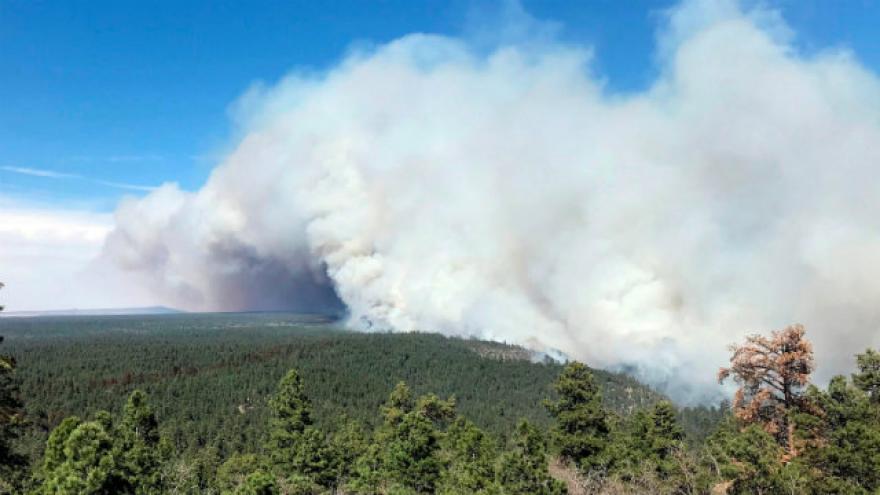 (CNN) -- Arizona Gov. Doug Ducey declared a state of emergency Monday in Coconino County in response to the Tinder Fire.

The fire has burned 9,009 acres since it began Friday, according to the US Forest Service. The cause of the fire is unknown, CNN affiliate KNXV-TV reports.

"I'm issuing today's declaration to ensure that they have the necessary resources to protect the lives, pets and property of Arizonans," Ducey said in a statement.

The Coconino County Sheriff's Office ordered evacuations Sunday for communities north, east and west of Highway 87. The evacuations will be in effect until further notice, KNXV-TV reports. An evacuation site was set up at a Navajo casino resort, after being moved from a junior high school because of smoke.

A total of 1,000 structures are threatened by the Tinder Fire, KNXV-TV reports, and about 500 personnel, including 7 hotshot crews, are fighting the blaze.

The Coconino National Forest tweeted that winds were blowing very hard east-southeast with gusts up to 30 mph.

The fire also caused major road closures, according to the Arizona Department of Transportation.

The Arizona Pubic Service, a state electric company, said via Twitter that it was "coordinating with emergency personnel" and was ready to de-energize lines if needed.

CNN meteorologist Michael Guy said conditions for the Arizona fires, specifically the Tinder fire, are going to continue to be elevated and critical from New Mexico over toward West Texas.

Wind conditions will improve for a short period overnight, he said, but it will still continue to be extremely dry.

As the sun comes up Tuesday and the weather warms, winds will pick up again from mid-morning through evening, with dry conditions continuing. The stronger the winds, the bigger the risk of the fire spreading rapidly due to the blowing embers sparking even more fires. Sustained winds of 20 to 30 mph maximum are forecast tomorrow from Arizona through New Mexico toward West Texas. Extremely low relative humidity will also continue through the day tomorrow as well.

Guy said conditions are not expected to improve significantly until late Tuesday or early Wednesday.