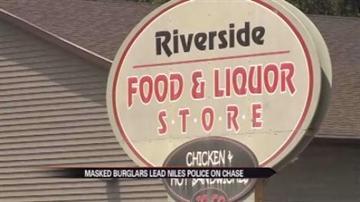 NILES, Mich. -- Three suspects in the robbery of the Riverside Food and Liquor store in Niles were the subject of a manhunt Sunday night. They were located and appeared in court Monday.

Across the street from the courthouse is Riverside Food and Liquor. It was open Monday, less than 24 hours after it was robbed.

The store clerk says she was behind the counter just before 8 p.m. Sunday when three men wearing masks walked in the front door.

One went behind the counter and made her empty everything from the cash register and the safe into a plastic bag.

According to court documents, a witness called police after seeing the three suspects flee in a maroon SUV.

An officer found a car with that same description just north of Sumnerville in Cass County.

The officer pursued the car until it stopped in a yard on the Pokagon Highway. All three people in the car jumped out and ran in different directions.

Officers set up a perimeter and used K9s to search for the suspects.

First they located 24-year-old Jadius Owens. He was hiding in a tree with a large wad of cash on him.

The other suspects were found just after 2 a.m. An officer spotted a car driving slowly just south of Sumnerville and conducted a traffic stop.

In the car, the officer found 18-year-old Tyshawn Kellog and 19-year-old Daris Boles. Each had large wads of money in the car.

All three suspects were in court Monday. Their bonds were set at $200,000.

Owens and Boles are each facing three charges including armed robbery, resisting arrest and a felony firearm.

Kellog faces two counts, one for armed robbery, the other resisting arrest.