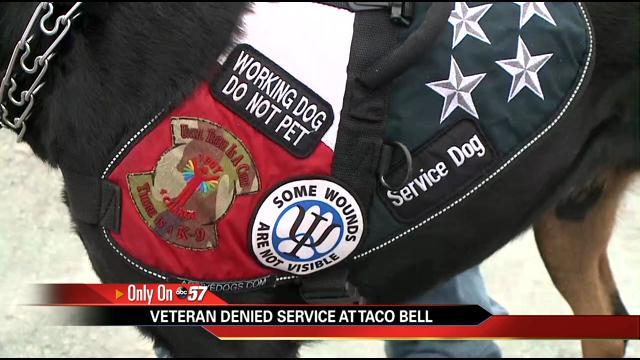 An Army Veteran said he was kicked out of the Taco Bell on M-139 in Benton Township because he had a service dog.

The veteran called 911 because he said the scene got heated.

Here is some of the audio from the call: “I'm a veteran. I have PTSD and I have a service dog. And the lady has refused service and wants to throw me out of the establishment. She's still cussing and putting me down and bullying me.”

The fast food chain said the issue was resolved and they invited the veteran back into the restaurant.

Lance Reeves said this happened on December 13th and it's upsetting because he served our country for nearly 22 years.

Reeves said he served for 4 years as a Military Police officer in Iraq and now he suffers from Post Traumatic Stress Disorder.

He said his service dog 'Bolo' goes with him everywhere, and helps him when he's having anxiety.

Reeves said, “If I'm having real bad nightmares and night sweats, he's able to turn on the light and wake me up and get me out of that. If I stop breathing at night, he can lay on my chest and get me to breathe.”

Reeves said certain events and triggers like a loud shooting scene in a movie can give him anxiety and Bolo helps him cope in those situations by licking his hand and bringing him back to reality.

Reeves said, “The war may have stopped because we're here on this soil, but the war hasn't stopped in our minds.”

Reeves said he was shocked that a worker at Taco Bell kept saying 'he's not blind.'

Taco Bell spokesperson Rob Poetsch said, “We have a very clear policy welcoming guests with service dogs in our restaurants. In this case, our franchisee followed the proper procedure by immediately resolving the issue with the customer and reminding his employees of the service dog policy."

Reeves claims no one formally apologized but he called the corporate office at Taco Bell several times. He said he came to ABC57 with this story because he wants folks in Southwestern Michigan to realize service dogs like Bolo are becoming more prevalent.

Reeves said, “Service dogs and service animals are going to be part of the scene. Especially as we've wrapped up the wars in Iraq and Afghanistan, they're going to become more mainstream.”

Reeves said he he is currently working with a psychiatrist and teaching a class to other local veterans in Battle Creek on PTSD and coping after war.