Arrest made in death of Anthony Perez 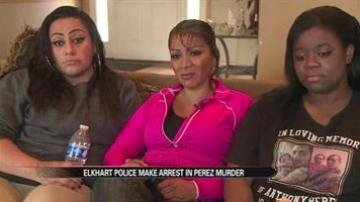 ELKHART COUNTY, Ind. -- Less than 48 hours after airing an interview with Maria Botello pleading for justice for her son, Anthony Perez, an arrest was made in his death. The Elkhart County Sheriff's Department has a suspect in custody.

"When I received the call to tell me that, I almost had a heart attack," said Botello.

Botello says 6 weeks after her son was murdered, she got the good news she's been waiting for.

"Mixed emotions. I want to run, cry, laugh, but finally I pray, and I say God, thank you," aid Botello.

At a press conference, Elkhart Sheriff Brad Rogers made the announcement.

"On May 13, 2014 Detectives from the Elkhart County Sheriff's Department served an arrest warrant in Chicago on Miguel Martinez for the murder of Anthony Perez," said Rogers.

Botello says 19-year-old Miguel Martinez was someone her son considered a friend.

"One day he come to his house with no shoes, bare feet, and he give up a pair of shoes, Jordans. So he has to remember he killed the person who did everything for him," said Botello.

The Perez family knows this is just the beginning, but they are grateful for the work detectives are doing, and grateful to ABC 57.

"God bless you because, you're helping us and it's a big thing hug from Maria. Thank you Jasmine, you do a good job," said Botello.

Martinez is being held in a jail in Chicago, but the prosecutor's office says they are in the process of getting him back to Elkhart County.